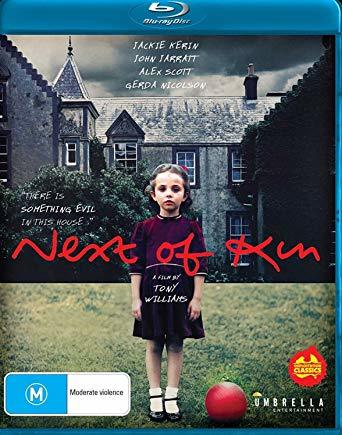 "There is something evil in this house... She should never have come back!"
— Tagline

Next of Kin is a 1982 Australian horror film directed by Tony Williams and featuring a score by Electronic Music legend Klaus Schulze.

The plot revolves around a young woman named Linda Stevens (played by Jackie Kerin) who inherits the ominous but seemingly harmless Montclare retirement home from her late mother. At first, everything seems normal. However, while on a day trip to settle her mother's estate, strange deaths start occurring in the home. Eventually, Linda uncovers her mother's diary which details identical events twenty years earlier. It soon becomes apparent that something evil resides in the house, and that something wants Linda dead.

While not exactly well-known outside its country of origin, it has generally received praise those who have seen it, most notably by Quentin Tarantino, who has compared its atmosphere and pacing to that of The Shining.