Film / A Murder of Crows 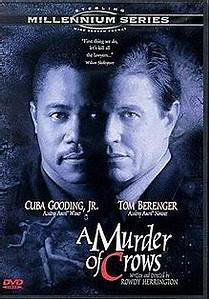 It opens as the main character, Lawson Russell (Gooding), is taken to jail, acting as Narrator to explain How We Got Here. It began on Mardi Gras in New Orleans, when Lawson is wrestling with a new-found sense of conscience. Unbeknownst to him at the time, a man dressed as Satan picked the lock and slipped into his office, intending to kill him. Lawson cannot reconcile his duty as a defense attorney with the knowledge that his client, Thurman Parks III (Stoltz), the wealthy son of a former mayor of New Orleans, is guilty of murder after he gloats about having told his victim he would get off. The man has a gun on Lawson as he calls the judge and asks to be withdrawn from the case, which upsets His Honor. Seeing him doing this, the intruder stops, listens to his call, and then leaves Lawson alive. The next morning, the judge rejects Lawson's request to be withdrawn, and Lawson turns on his own client, attacking him verbally while on the witness stand, which causes the judge to declare a mistrial and hold him in contempt of court.

Lawson is disbarred, and while his friend Elizabeth Pope (Jean-Baptiste) praises his action on moral grounds, he goes off to Florida, working as a fishing guide. There he meets an old Englishman named Christopher Marlowe who retired there and greatly dislikes lawyers. He shows Lawson a manuscript of his called A Murder of Crows (from a group of crows being called a murder), about a Serial Killer who targets what he sees as morally corrupt defense lawyers. Lawson, who has been struggling to write a novel himself without success, thinks it's brilliant, if somewhat creepy. When Marlowe suddenly dies from a heart attack, he succumbs to temptation and passes off the work as his own. It quickly becomes an overnight success, climbing onto the bestsellers list despite strong criticism from the legal profession. One book signed by Lawson is sent out to a New Orleans detective, Cliffard Dubose (Berenger) who quickly recognizes a shocking fact-the murders in the book actually happened.

Lawson is arrested and interrogated. Detective Dubose was on the first case, and thinks Lawson sent him the book because only he could understand it. After all, he reasons, what's the point of committing the perfect murder if nobody knows about it? The book contained not only depictions of real murders, but specific details which only the killer could know. Lawson denies everything of course and Pope manages to get him released for cooperating. He confesses to her what he did, plagiarizing the book, but Pope is doubtful. Even worse, he destroyed the original manuscript to erase any evidence of plagiarism, while the only person able to confirm he did not write it was the dead man he took it from. More evidence (photos of the murder victims taken by the killer of the victims) is found planted in Lawson's home, causing him to flee the police while, in classic Hitchcockean style, searching for the real killer to clear his name.