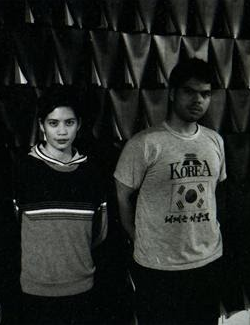 If Warp Records and early-to-mid 90s' Creation had an illegitimite lovechild, chances are they'd name it Sweet Trip.

...Okay, but seriously, Sweet Trip are a American musical duo consisting of Valerie Reyes and Roberto 'Roby' Burgos, best known for their unique and colourful fusion of shoegazing, glitch and Electronic Music.

Originally forming in 1995, the band released three studio albums through Darla, each radically different in style and approach, starting out playing dreamy Ambient Techno and then gradually becoming more indie rock inspired (though the electronics never completely went away).

Although critically acclaimed, Sweet Trip's music was somewhat overlooked during their original run, due to their sound being simulatenously ahead of its time and out of fashion (in the early 2000s, experimental electronica had not yet infiltrated the mainstream, and it was a few years before shoegaze received its Genre Relaunch), and had planned to call it a day after their third album.

However, the band have been enjoying something of a Newbie Boom since The New '10s, especially on online forums such as /mu/ and rateyourmusic.com. This new-found attention gave them enough encouragement to continue, with a brand new album released in May 2021.

On January 2022, the duo announced their breakup.