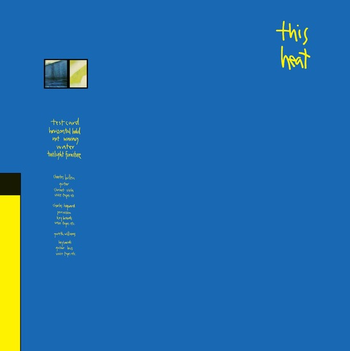 "My God how we got so far, only to reach so low..."
Advertisement:

The self-titled debut album by experimental rock group This Heat was released in 1979. Known unofficially as "Blue and Yellow" in reference to its Minimalistic Cover Art, the album compiles recordings made by the band between 1976 and 1978, in a variety of different locations, including their studio space Cold Storage.

A raw, harrowing mixture of droning soundscapes, noisy tape collages and improvised live performance, the album's uncompromising, non-commercial sound failed to reach a mass audience upon its release, but nonetheless received great critical acclaim, thanks to long-time support from DJ John Peel, and has since become regarded as a key influence on the Post-Punk / experimental music scene.