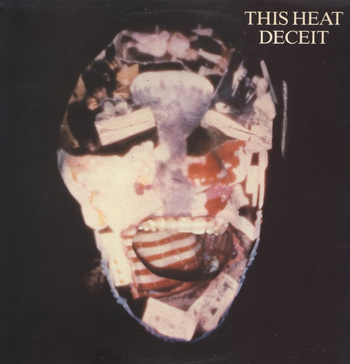 The face of deceit.
"The whole speak, 'Little Boy', 'Big Boy' [sic], calling missiles cute little names. The whole period was mad! We had a firm belief that we were going to die and the record was made on those terms.… The whole thing was designed to express this sort of fear, angst, which the group was all about, really."
Charles Hayward, This Heat
Advertisement:

Picture this, it's the early 1980s: The Cold War was at its height, relations between the East and the West were deteroriating, and the likelihood of the whole planet being wiped out in the event of a nuclear disaster seemed to loom larger than ever.

In the midst of all this tension, three radically-minded musicians from London, stationed in a converted meat storage facility dubbed Cold Storage, used their collective talents to deliver their vision of how such a horrific event would pan out.

The result was Deceit, the second (and final) studio album by This Heat, released in 1981 through the Rough Trade label.

Musically, it's a very difficult album to categorise, as it incorporates elements of Progressive Rock, folk, free jazz, gamelan, field recordings and even Electronic Music; its raw production and diverse sound earned it something of a kinship with the Post-Punk movement, which took in similar influences. Whilst the album didn't deviate too much from the experimentation of the band's earlier work, it's argued that the introduction of more recognisable song structures on Deceit allowed the group to articulate their message much more clearly than before.

Happily, by the end of the decade, tensions between countries had eased and nobody got blown up, but at that point This Heat had already called it a day a few years prior. Whilst changing tastes in music had left Deceit (and the rest of This Heat's music in general) largely underground, its unorthodox song structures, uniquely DIY, collage-like approach to production and political leanings have developed a following in later years, and is considered an early precursor to Post-Rock.

"We are all tropers, we live to regret it":