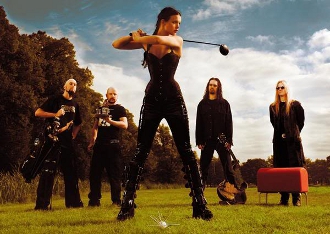 Dammit, Aurora, it's hot out here. Sink this motherfucker and let's get back to rocking.
"Right after Deggial I had ideas for a new album, but one day I woke up and felt I needed to make a Nordic concept album for some reason."
— Christofer Johnsson on the origin of Secret of the Runes
Advertisement:

Originally formed in 1987 by bassist/vocalist Christofer Johnsson as a Death Metal band named Blitzkrieg, they split up after only two shows but were soon reformed under the name Megatherion, after the album To Mega Therion by Celtic Frost. Johnsson switched from bass to guitar and the band went through some lineup changes, and the name was shortened to Therion.

The band recorded two demos, an EP, and three albums in the Death Metal style, with their second and third albums showing some experimental tendencies, such as the inclusion of keyboards and classically-trained singers. Their fourth album, Lepaca Kliffoth, switched to a more Thrash Metal and Celtic Frost-influenced style with Johnsson changing his vocal style from death growls to a higher-pitched shout. The album also featured classical singers once again and had more prominent keyboards.

Therion's fifth album, Theli, is the point at which the band became full-blown Symphonic Metal, with two choirs providing most of the vocals and complex keyboard parts used to simulate an orchestra. The band has continued refining this sound throughout the years, using live orchestras on most subsequent albums.

Most of Therion's lyrics deal with occultism, religion, and mythology, and are written by Thomas Karlsson, head of the occult order Dragon Rouge, of which Johnsson is a member. However, Karlsson has never been an official band member.

The band's current lineup is: