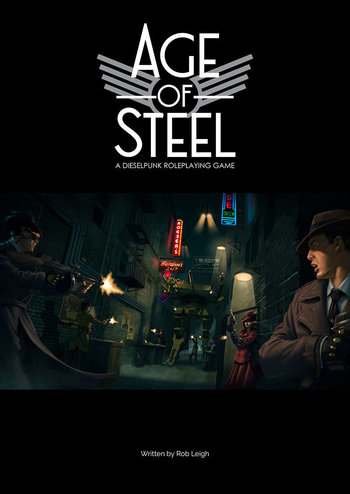 is a Tabletop Roleplaying Game in the Diesel Punk genre. The game is set in Neres, a world very similar to our own during the 1920s and 30s except for the presence of diesel-powered mecha, airships being preferred over planes, and Weird Science powered cybernetics.

Six years ago the various nations of Neres became embroiled in a global conflict called the Great War, a mirror of our World War 1. Hundreds of thousands of men and women fought and died in the trenches, as bombs, gas, and Mecha were used by both sides.

Fearing the Great War would lead to the end of the world, genius scientist Johann Ansler created a super-weapon named the Peace Ray and used it to scare both sides of the war into an enforced ceasefire. Ansler subsequently vanished, leaving a fragile peace only maintained out of fear that he was out there, somewhere, watching.

Six years later and the tentative peace is beginning to fray. The various Great Nations have begun plotting against one another again, and in the shadows something even more insidious plots against all of humanity.

Tropes found in Age of Steel