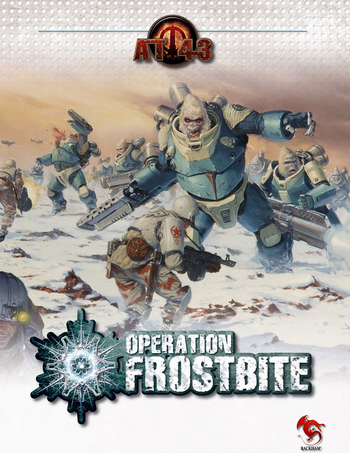 The cover of AT-43's second major expansion, which ended up being its last.
Advertisement:

AT-43 is (well, was) a Tabletop Game by Rackham and can be summed up as a Lighter and Softer version of Warhammer 40,000.

The story is centred around the human homeworld Ava, which, thanks to precursor artefacts, created a small (compared to other races; a mere hundred or so planets) empire in a thousand years after finding them. However, Ava's first colony Hades, aggravated by Ava's total free marketing ideas (i.e. no workers' rights), revolted and turned communist collectivist, taking fully half of Ava's colonies with them and renaming themselves the Red Blok. This forced Ava to cancel the debts of, and grant full membership into the U.N.A., to the remaining colonies in other to stop them from joining the revolt. Civil war soon followed.

Then the precursors showed up, with giant chain-smoking apes with big guns.

Turns out the Therians, a race of Transhuman Internet junkies are the real humans having reached The Singularity over half a million years ago. One of their pet projects happens to be taking over the universe in order to stop it from dying in about 25 billion years. They do this by seeding worlds with humans, giving them databases of information to speed up their development and waiting until the planet's resources are used up, whereupon the Therians come in and blow it up so they can use what's left to make a Dyson Sphere, which the Therians then move.

However they did not foresee the U.N.A. and the Red Blok joining forces and driving them out before they could destroy Ava, but not without a heavy price: the Red Blok lost a large bulk of its forces and half of Ava's population was killed by the Therians altering the planet to be more Earth-like. This marked the first time in over one hundred thousand years anyone had defeated the Therians. This event is known as The Trauma to all parties involved.

43 years after the Trauma, the U.N.A found the Therian world that launched the invasion (for the Therians it's more like a transport ship), Damocles.

The main factions of the game currently are:

AT-43 provides examples of: