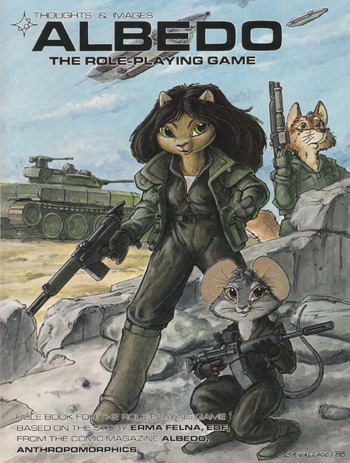 "As they looked to the heavens, they wondered, just what kind of people where they?"
— Tag Line from the Albedo Platinum Catalyst tabletop RPG.
Advertisement:

Albedo: The Role-Playing Game is a Tabletop Game originally released in 1988 (first edition) and 1993 (second edition) as a RPG adaptation of Steve Gallacci's Albedo: Erma Felna EDF furry comic and originally published in the own author's Thoughts & Images' self-publishing brand, with Paul Kidd (Scriptwriter of Nightshade and Shadowrun lead designer for the Super NES) writing the script and Gallacci himself doing the art used in the game.

The premise of the game is more or less simple: You're basically playing as a member of either the Extraplanetary Defense Force (EDF), the Independent Lepine Republic (ILR), or Enchawah Corporation and you have to deal with the different types of military, political and social problems that exist in the Albedo universe, often with the help of canon characters and sometimes on your own. Unlike other RPGs, you don't need to play a warrior character, as you can be a soldier, a scientist, a policeman or even a prostitute if you want to. The most important part of this game is how sociable you can be and how your ability to communicate with others, rather than your fighting skills, can help you get out of any mess you find yourself in.

As an additional note, the RPGs are notable for being a Universe Bible of sorts for the whole Albedo universe, even if some information can contradict some info used in the comic, especially regarding food and some elements of the backstory.

NOTE: This page is only for tropes from either the original RPG and its Updated Re-release, and not from the miniature-based RPG Albedo Combat Patrol 164.