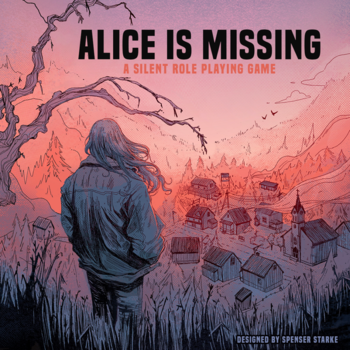 I was calling / for the last time
Hey! Sorry for the big group text, but I just got into town for winter break at my dad's and haven't been able to get ahold of Alice. Just wondering if any of you have spoken to her?
Advertisement:

Alice Is Missing is a silent 2020 tabletop board game/roleplaying game designed for 3 to 5 players by Spenser Starke and published by Hunters Entertainment. It is played entirely through text, and leans much more into the roleplaying side than the board game side.

It's Saturday, the first day of winter break at Franklin Academy in Silent Falls, California, and Alice Briarwood hasn't been seen since Wednesday. Charlie Barnes, a friend of Alice's who moved away several months ago after their parents' divorce, has just arrived back in town for the winter holiday. Their group text to some of their and Alice's mutual friends, seen in the page quote, kicks off the hunt for Alice.

Players take on the parts of Alice's friends and family, with roles ranging from Alice's sibling to Alice's secret girlfriend, and set up relationships between each other and to Alice. A list of suspects and suspicious locations are given more detail, linking them all in some way to Alice as a possible culprit or location. After the game begins, clue cards that provide prompts for the characters to discuss are automatically played every 5 to 10 minutes. This does the legwork of advancing the mystery as the characters speculate on Alice's disappearance, track down clues and suspects, and try to not let any interpersonal issues get in the way of finding their missing friend.

Sharing themes with (and openly inspired by) games like Life Is Strange, Oxenfree, Firewatch, and Gone Home, Alice Is Missing is noted for being a deeply emotional experience, using a unique text-only-communication mechanic, and having a pre-made soundtrack that also acts as a timer.

. If you want to get a feel for it, enjoy this livestream featuring the game's designer, Spenser Starke

. The official timer and soundtrack is here

Tropes found in Alice Is Missing: