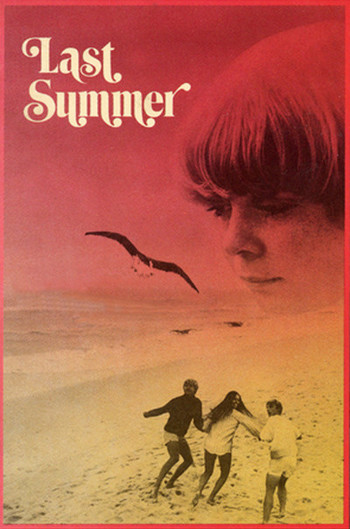 Last summer was too beautiful to forget ...and too painful to remember.
Advertisement:

A 1969 drama film directed by Frank Perry and adapted by his wife Eleanor from Evan Hunter's eponymous novel published the year before, Last Summer is a coming-of-age story about four teenagers, all with hard lives and strained relationships with their parents, spending a summer vacation together on New York's Fire Island.

One day while playing on the beach, Sandy (Barbara Hershey) discovers a seagull with a broken wing, shortly before being greeted by Peter (Richard Thomas) and Dan (Bruce Davison). Together, the three of them band together to fix the seagull's wing and teach it to fly again. As this project continues, they bond and commiserate over issues they have with adults, particularly their parents. Also lots of alcohol and sex.

Towards the end of this project to help out the seagull, they encounter a younger and socially awkward girl named Rhoda (Catherine Burns), who voices her issues with their attempts at rehabilitating the seagull. Though distant at first, the three warm up to the new girl, and decide to teach her how to swim. Romance and horror ensue.