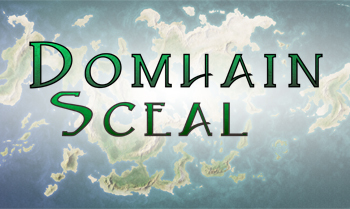 "Domhain Sceal" is a troper project to create a detailed, entertaining and functional campaign setting for use with fantasy tabletop systems. It's system-free- No attention is paid to the concept of mechanical rules, allowing the combined creativity of half a dozen people to be focused on the story and flavour.

The general approach of the project is "different but familiar," providing twists on many things while still paying homage to the traditional archetype. Of note, races are approached as a physical template; within each race exists a multitude of cultures, averting the "one race, one creed, one king" issue seen in many RPGs.

The setting is still very much under construction, so new sections (and, of course, tropes) will be added frequently. Contributions are welcome, but please make sure your idea hasn't been covered yet. The project is currently under going an overhaul/reboot so any information below is subject to change if removal in the coming weeks and months. For now information is being kept here as a resource for the team.

Tropes applying to this setting: