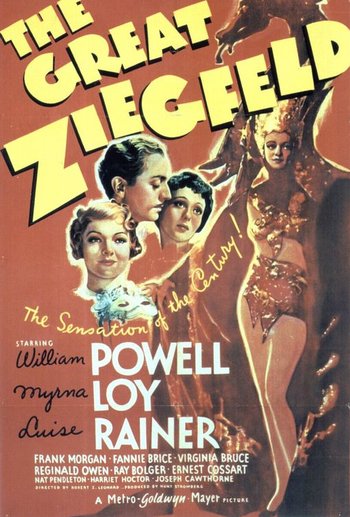 It is a Biopic about Florenz Ziegfeld Jr. (Powell), Broadway's most famous producer of his day. From humble beginnings as a carnival barker managing a strongman, Ziegfeld reaches the heights of success, producing hit show after hit show and staging the famous Ziegfeld Follies. It is also a showcase for numbers from his most famous shows. Rainer stars as Anna Held, Ziegfeld's first wife, a French singer whom Ziegfeld manages to sign in what is a big step forward for his career. Loy is Ziegfeld's second wife, stage and film performer Billie Burke (the Real Life Burke played a succession of ditzy society wives, but is best remembered as Glinda in The Wizard of Oz). And speaking of The Wizard of Oz, Frank Morgan plays Billings, one of Ziegfeld's producer rivals.

It was a huge success, winning the Academy Awards for Best Picture and Best Actress for Rainer. The next year Rainer won again for The Good Earth, making her the first person ever to win back-to-back acting Oscars and one of only five to this day (the others being Spencer Tracy, Katharine Hepburn, Jason Robards,and Tom Hanks). Oddly, not long after picking up her second golden statue her career tanked and by 1938 she was out of Hollywood.

The Great Ziegfeld features examples of the following tropes: