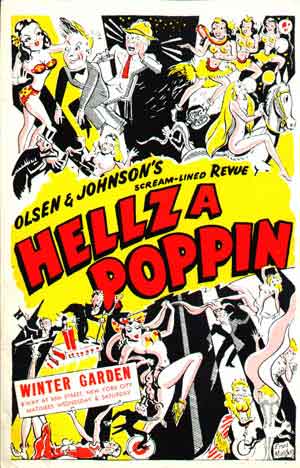 Olsen: Rewind this film, will ya?
Louie: What's the matter with you guys? Don't you know you can't talk to me AND the audience?
Olsen: Well, we're doing it, aren't we?
Advertisement:

Hellzapoppin' is a classic 1941 American musical comedy film based on the popular musical stage revue of the same name. The very loose plot revolves around the comedic duo Olsen & Johnson, who plan to star in a film. The film director suggests a story which they participate in, only to bothered throughout the whole picture by several absurd gags and jokes that make clear that there is No Fourth Wall.

However, as the tagline says: "Any resemblance between Hellzapoppin' and a motion picture is entirely coincidental." This is part of the reason why the film wasn't that succesful, despite the appearance of popular actors and comedians like Ole Olsen, Chic Johnson, Mischa Auer, Martha Raye, Hugh Herbert and Shemp Howard from The Three Stooges. However as Time Marches On the film has been Vindicated by History as a surrealistic comedy constantly Breaking the Fourth Wall that was far ahead of its time. Certain jokes are almost predecessors of later types of absurd comedy. It was also very influential on later generations of comedy films. The "Lindy hop" dance sequences made it also very popular with musical fans. In other words, it's a true Cult Classic.