A mercenary and member of the U.B.C.S. squad tasked with evacuating the zombie-infested Raccoon City, Jill's partner character in 3.

A U.B.C.S. sergeant in Carlos's squad with a strong distrust towards Jill. 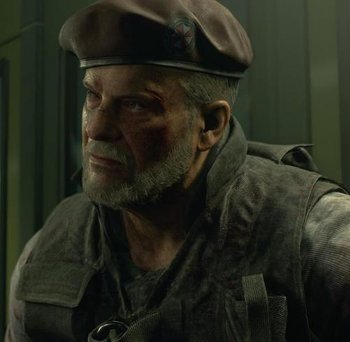 Voiced by: Ben Campbell (1999) and William Hope (2020), Naoki Tamanoi (Japanese).
"The city is completely cut off. Isolated. We need help. My men cannot do this alone."

The leader of the U.B.C.S. platoon that Carlos and Nicholai belongs to. He's already in critical condition by the time Jill meets him. 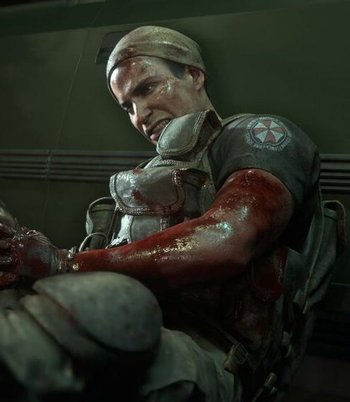 A sniper for Alpha Platoon and operating in Squad A. 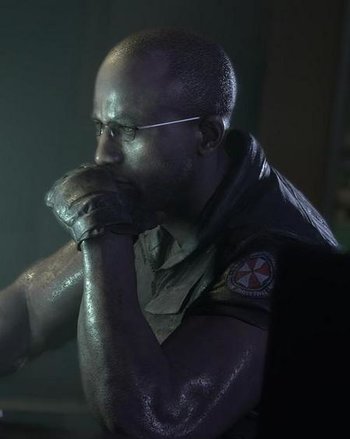 A member of Bravo Platoon's Squad A, and the group's Tech Specialist.

A salesman who was with his family in Raccoon City when the outbreak began.

The Head of Research at the Spencer Memorial Hospital and one of the chief scientists at yet another underground Umbrella research facility, NEST 2. 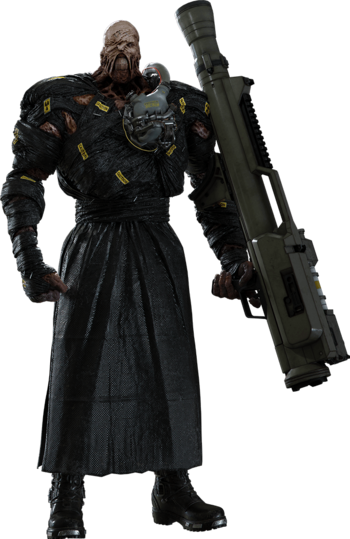 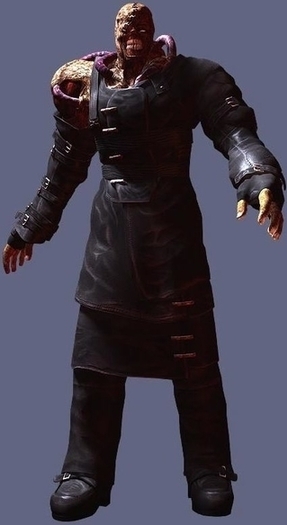 An Up to Eleven version of the Tyrant, tasked with killing the remaining members of S.T.A.R.S. from the Mansion Incident. He appears in RE3 as The Heavy, more or less playing the same role as "Mr. X" from RE2 — with the addition of Combat Tentacles, a BFG, and the ability to talk. This is only natural, since Nemesis was specifically designed to be an upgraded version of the T-00 with a dose of extra Body Horror — it's a T-103 Tyrant infected with the Nemesis-Alpha, a macroparasite engineered in the Umbrella France laboratory.

Drain Deimos and Brain Suckers are scuttling, fluid-sucking insectoid horrors that Jill will encounter repeatedly throughout the game.

Hunter Beta
Hunter Gamma
Sliding Worms
The Sliding Worms are massive, mutated annelids, resembling oversized leeches, and may be the progeny of the Gravedigger.
Gravedigger
The Gravedigger is the biggest mutant in Raccoon City, an enormous infected annelid whose burrowing under the ground creates earthquakes and subsidence.

Daniel Fabron
"Bonjour, mon ami! The wheels of fate led you to a strange place today, non? Let us see if you walk away...or not."
Voiced by: Kaiser Johnson (English), Hiroshi Shirokuma (Japanese)

Spencer's personal "fixer" and Alex Wesker's assistant. Though he isn't a scientist, he is well-versed in controlling B.O.W.s. His playstyle focuses on summoning and controlling powerful creatures, including the devastating Tyrant.

One of Umbrella's best and brightest scientists, and one of the minds behind the G-Virus, alongside her husband William. Her playstyle focuses on bringing out the full potential of B.O.W.s by powering them up. She can sic her mutated husband, William in his G1 form, on survivors.

Alex Wesker
"My whole life has been a prelude to the knowledge I gain today!"
Voiced by: Mary Elizabeth McGlynn (English), Rika Fukami (Japanese)

One of the subjects of Project W, which also gave birth to her "brother" Albert. Alex's playstyle favors indirectly hindering her victims with traps and enhanced monsters. She is also able to summon the Yateveo, a massive carnivorous plant that compensates for its lack of mobility with terrifying lethality.

For more information on Alex Wesker, see the Resident Evil: Revelations 2 character sheet.
Ozwell E. Spencer
"My time may be short now, but with what I learn today, I could become a god!"
Voiced by: Time Winters (English), Issei Futamata (Japanese)

One of the founders of Umbrella, and its current president. As the leader of the nefarious organization, Spencer has a number of powerful technological assets to leverage against the survivors. He isn't capable of taking direct control of zombies, but unique to him is the ability to summon a Disintegration Field to lock down any area he doesn't want the Survivors wandering into, lest they risk life and limb.

A mercenary who will happily work for anyone — even Umbrella — for the right price. His pragmatism and dangerous marksmanship show in his playstyle, which focuses on arming cameras with deadly weapons and tracking his prey. His signature bioweapon is none other than Nemesis, itself: a terrifying monster who can chase down survivors with blinding speed and assail them at range with tentacles and a rocket launcher.

For more information on Nicholai Ginovaef, see his folder above (named "Nikolai Ginovaef").

Samuel Jordan
A professional boxer who was forced into retirement due to an injury and joined in Umbrella's research in the hopes of restarting his career. Samuel is a close-range bruiser who can use his boxing skills to defend himself, using Dash Punch to charge down enemies and Fists of Iron to beat them down.
January Van Sant
A hacktivist who was abducted by Umbrella after looking into their activities and their connections to the Raccoon City Police Department. January is a saboteur who can use her hacking abilities to interfere with the Mastermind, using Overload to temporarily disable cameras and EMP to interfere with all cameras while increasing the Mastermind's cost to use their abilities.
Valerie Harmon
A grad student and expert chemist who was hired as an intern by Umbrella, then subsequently abducted when she started looking into a roommate's memory disorder. Valerie is a supportive character who can heal her allies personally with her Modified First-Aid Spray, as well as more easily identify threats and items with her Survival Instinct.
Tyrone Henry
A firefighter with the Raccoon City Fire Department who was abducted while battling a fire at an Umbrella facility. Tyrone is a tank who can keep enemies at bay with a Power Kick, as well as Rally his allies to help them take less damage.
Becca Woolett
A park ranger who was abducted by Umbrella following an encounter with mutated dogs. Becca is a sharpshooter who is well-versed in firearms: her Sentry Stance improves her aim considerably, and with the Bullet Storm ability, she can fire without spending any ammo for a short time.
Martin Sandwich
A mechanic who stumbled upon Umbrella secrets while conducting repairs at Spencer Memorial Hospital, secrets that some would prefer not be known. Martin is a gadgeteer who can build his own traps to keep B.O.W.s at bay, such as a Makeshift Mine to blow creatures away, or a Flash Baton to stun them.
Jill Valentine
Former S.T.A.R.S. Specialist Jill was suspended and ordered to stay in her home when her RPD Supervisor discovered she was investigating Umbrella's illegal activities. Jill began having horrific "dreams" involving a group of young strangers and unfathomable terrors. Gradually, she began to realize that the never-ending loop of nightmares are in fact very, very real.For more information about Jill Valentine, see the Resident Evil character sheet.