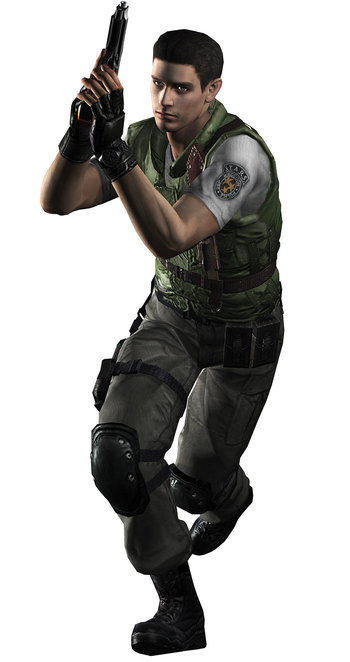 The face of the Resident Evil series, Chris Redfield was introduced in the very first game as one of the two player characters. His character page can be found here. 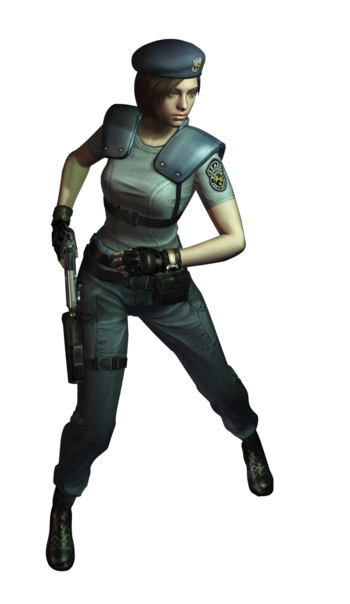 The first female protagonist of the series, appears in the first game, Resident Evil 3, the "End of Umbrella" scenario, Revelations, and the RE5 DLCs "Desperate Escape" and "Lost in Nightmares". Originally a member of S.T.A.R.S. Alpha Team, she also co-founded the BSAA and was directly involved in the downfall of Umbrella. Serious and dedicated, she shares a strong bond with her partner, Chris. 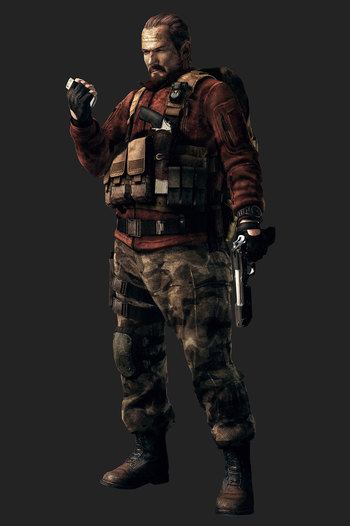 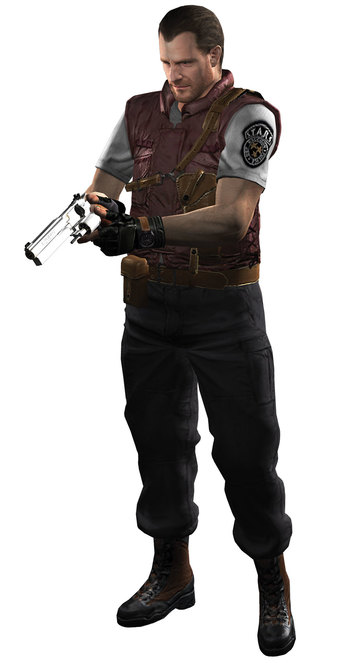 Introduced in the first game as the STARS weapon supplier. He befriended Chris in the Air Force in the mid-1990s and is the only protagonist known to have children. Since Resident Evil he has only made a cameo appearance in Resident Evil 3 and had his own game Resident Evil Gaiden, the latter not being considered canon. Resident Evil: Revelations 2 sees his return and playable in story to boot.

The most recent member of STARS Bravo team, and the youngest member of either team in Resident Evil. She supported Chris in the first game, and is one of the two protagonists of the prequel, Resident Evil 0. She's a specialist in chemicals and first-aid assistance.

After over a decade of not being seen in the Resident Evil universe outside of Mercenaries mode cameos, a stage play called Biohazard: The Stage

made its debut in late 2015 that revealed she was working as a university professor in Australia up to at least the timeframe between Resident Evil 5 and 6. The third CG film, Resident Evil: Vendetta, also features her as a main character alongside Leon and Chris, which is set in the timeframe after 6. 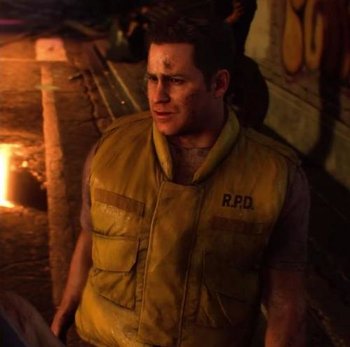 The S.T.A.R.S. Alpha Team's helicopter pilot, Brad was well-known on the team for being chicken-hearted, often wanting to run at the first sign of danger. After the Mansion Incident, he became a target just like Jill Valentine of the Nemesis in 3, which he ultimately fails to survive. 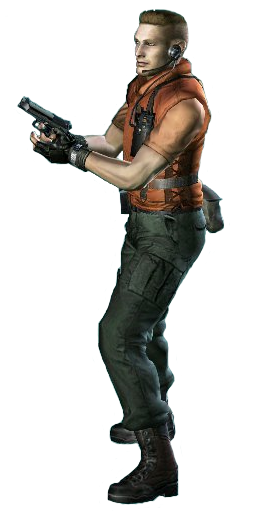 Bravo Team's communications expert, he is described as a "positive, sweet guy" and "calm under pressure" despite his young age. 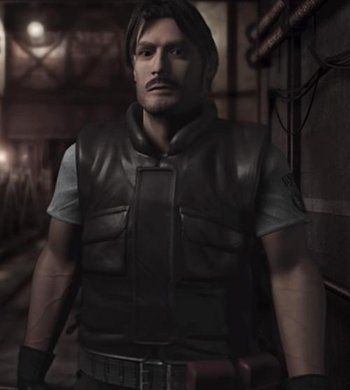 The S.T.A.R.S. Vice-Captain and Captain of Bravo team. 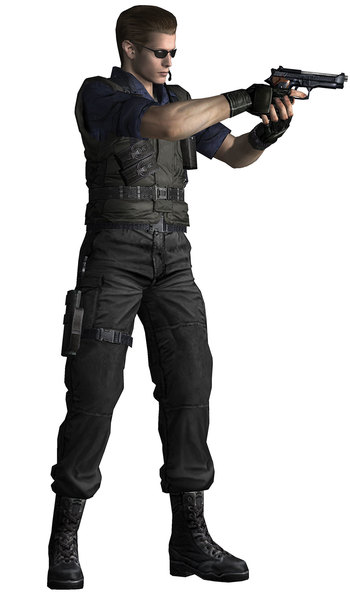 The leader of S.T.A.R.S., Wesker is in fact a high-ranking Umbrella scientist, and betrays Chris and Jill at the end of the first game. Since then, he becomes their personal nemesis and a major recurring antagonist.

George Trevor was a renowned architect in the 1960s who specialized in adding gimmicks to his designs such as secret rooms and traps. Catching the attention of Lord Spencer, it was Trevor who designed the Spencer Estate and its elaborate puzzles. Following the completion of the mansion, Trevor and his family disappeared from the public when in reality, Trevor's wife and daughter were experimented on while George himself was left to die somewhere within the mansion's secret tunnels. 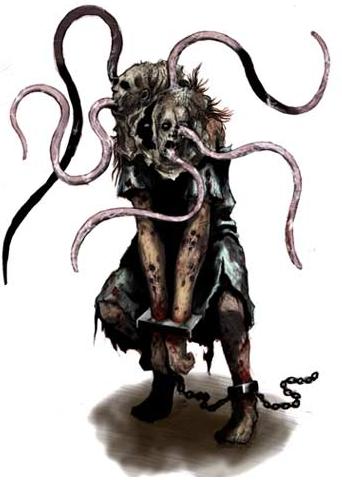 Umbrella's "patient zero", the first individual to survive injection with the Progenitor Virus, T-Virus, and many others and come out stronger. Her genetic tissue was also the origin for Birkin's "G-Virus". Introduced in the REmake, Lisa is the daughter of the Spencer mansion's architect, George Trevor. When her father was murdered to protect the mansion's secrets, both Lisa and her mother Jessica were kidnapped and used as test subjects by Umbrella. While Jessica had no reaction to viral injection and was killed before she could attempt escape with Lisa, Lisa had a strong reaction to everything Umbrella could think to throw at her, and was heavily experimented upon for the greater part of forty years, breaking her fragile sanity while also turning her into an invincible monstrosity. Testing finally ceased when Lisa murdered the Umbrella researchers posing as her parents, and sewed their faces to her own in hopes that she might return them to her parents. 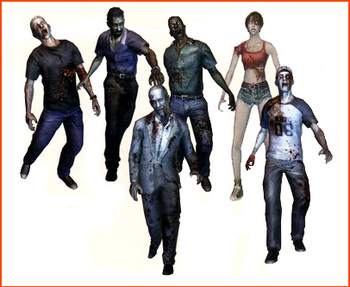 The iconic Resident Evil monster, the zombies are the direct result of exposing humans to the T-Virus. 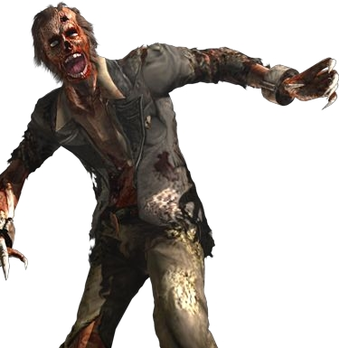 Crimson Heads, which have only appeared in the REMake version of 1, are zombies that have undergone a secondary mutation as a result of being incapacitated without taking a critical injury; the flood of adrenaline-rich blood through their body dyes their skin a gory dark red, they sprout claws, and their speed and reaction times all improve.

One of the most iconic enemies of the original Resident Evil titles, Cerberus is the codename for the zombie dogs infected by the T-virus. The Cerberus are, fast, deadly, and they hunt in groups. A Cerberus pack chased the S.T.A.R.S. Alpha Team into the Spencer Mansion at the start of the first game.

Umbrella's ultimate Super Soldier project, this singular monster lies at the heart of the Umbrella Labs and was Wesker's ultimate goal when he went in to retrieve Umbrella's data after the facility was destroyed. Unleashed before the self destruct countdown was initiated, it almost killed the survivors before being destroyed in turn. Unfortunately, Umbrella had salvaged the data, and would go on to conduct further experiments with refining this monster's power. 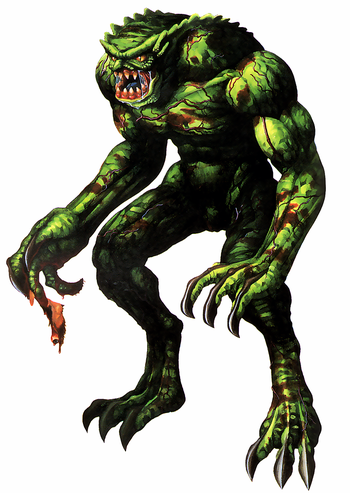 Umbrella's longest running and most successful breed of Bio-Organic Weapons, the Hunters are a T-Virus-enabled fusion of human and reptilian DNA, resulting in a fast, lethal, bestially cunning monster capable of dismembering its prey with built-in weaponry. Different variations of Hunters have appeared in many of the games in the series.

As part of their research, the Arklay team exposed spiders to the T-Virus, causing them to grow into giants, which they dubbed "Web Spinners"; whilst not as powerful or as intelligent as desired, they did hold some promise as secondary-wave bio-weapons.

One particular specimen underwent a secondary mutation and grew even larger than its fellows, earning the nickname "Black Tiger" for its ferocity and strength. Subsequent outbreaks would show that even normal spiders exposed to the T-Virus would grow in such a fashion. The Antarctica Research Lab would conduct similar experiments on black widows.

Yawn
Another animal experiment that the Arklay team tried was exposing an adder to the T-Virus. This creature would grow into a massive, man-eating giant, which the team dubbed "Yawn". Secondary exposure led to other adders in the nearby forest being exposed, causing them to become more aggressive and virulently venomous.
Neptune
One of the odder experiments the Arklay team attempted was FI-03, codenamed "Neptune"; T-Virus-infected great white sharks. Although successful in proving the T-Virus would work on marine organisms, the resultant giant sharks were of little practical use.
Chimera
The last of the deliberate B.O.W experiments conducted by the Arklay team was the Chimera, a repulsive mixture of human and fly DNA made possible through the mutagenic effects of the T-Virus. Whilst strong, quick, agile and aggressive, it was impossible to tame, relatively frail, and stupid, leading to it ultimately being shelved in favor of the Hunter line.
Plant 42
Contaminated water from the flooding of the Aqua Rings lab exposed a plant at "Point 42" of the lab's map to the virus, causing it to grow into a massive, predatory mutant.
Wasp
A nest of wasps in one of the cabins on the mansion's grounds were exposed and grew much larger, with more lethally potent toxin.