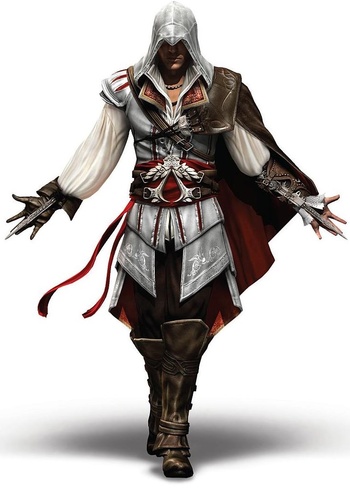 — "There is no book or teacher to give you the answers, to show you the way. Choose your own way! Do not follow me, or anyone else." —
Click here to see Ezio in Brotherhood 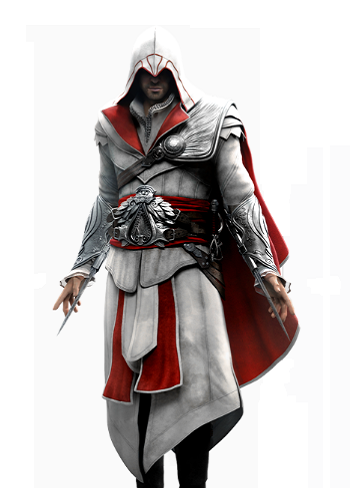 — "The liberation of Roma has begun!" —
Click here to see Ezio in Revelations 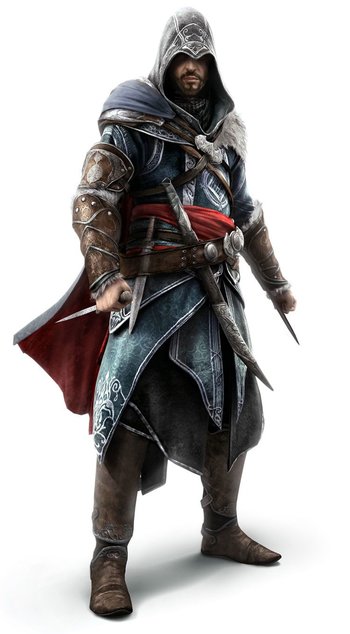 — "To say that nothing is true, is to realize that the foundations of society are fragile, and that we must be the shepherds of our own civilization. To say that everything is permitted, is to understand that we are the architects of our actions, and that we must live with their consequences, whether glorious or tragic." —
Advertisement:

The second son of banker Giovanni Auditore, he was born and raised in 15th century Florence (hence "da Firenze"). After his blissful and carefree life is destroyed when his father is betrayed, framed and executed as well as his two brothers (older and younger), Ezio learns that his father was an Assassin, puts his father's gear on and sets out on an epic decades-long quest for vengeance, hunting down — as well as adding to — Templar names from a list his father wrote, and gets progressively inducted in the Assassin Brotherhood.

The plot of the "Ezio Auditore Trilogy" shows his progression and growth, as Ezio goes from an enraged young man seeking revenge and cursing those he kills, to a mature and patient hunter of his foes, to a wise master who eventually rises to inspire the whole Assassin Brotherhood through wisdom, personal skill and leadership and allows it to prosper for centuries to come.