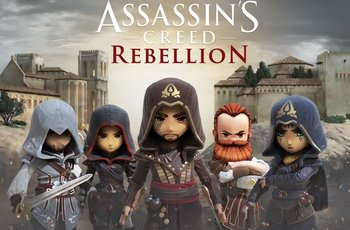 "All it takes to ignite a rebellion is a single spark."
Advertisement:

Assassin's Creed: Rebellion is a free-to-play 2½D strategy/RPG/action game for iOS and Android devices set in the Assassin's Creed franchise. It was developed by Behaviour Interactive and published by Ubisoft, and was released in November 2018.

The game follows the Spanish Assassins under Aguilar de Nerha at the time of the Inquisition, and features famous Assassins such as Ezio Auditore da Firenze, Shao Jun, Claudia Auditore and Niccolò Machiavelli, along with more than 30 new characters to unlock created exclusively for Rebellion.