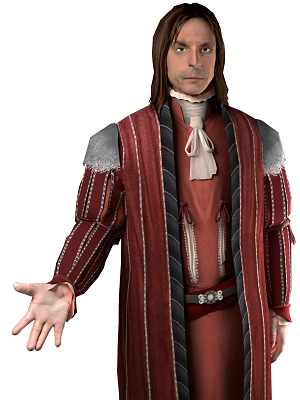 "Family. Justice. Honor. These are the values guiding my blade. This truth is written in blood, and the shadows are where I strike." 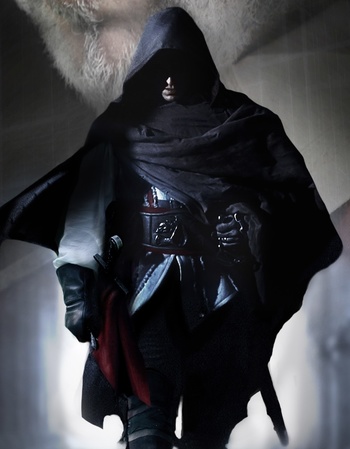 "Always remember: we are the Auditore da Firenze! We are Assassins!"

"I am Giovanni Auditore, and like my ancestors before me, I am an Assassin."

Ezio's father, a prominent Florentine banker and noble, as well as the personal Assassin of Lorenzo de' Medici. He is executed in a Templar plot at the start of Assassin's Creed II, which triggers Ezio's decades-long quest for vengeance. 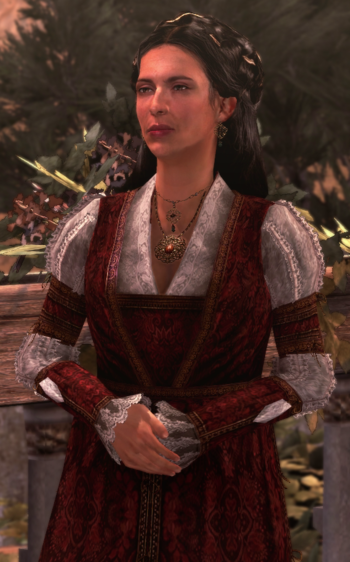 "Go, my son, destroy them... but remember for whom we Assassins fight."

Giovanni's wife and the mother of Ezio, Federico, Claudia and Petruccio. She knows about her husband's life as an Assassin, and later takes a more direct role helping the Assassins in Rome. 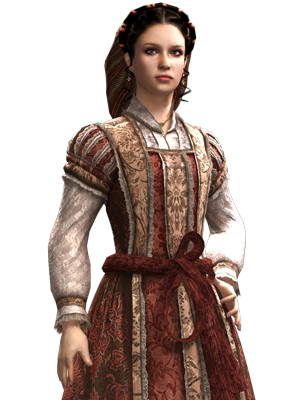 "You here to look at the book?"

Ezio's little sister. After the remaining Auditores flee Florence, she becomes Ezio's bookkeeper in Monteriggioni, helping him set up his business empire. Come Assassin's Creed: Brotherhood, she takes a more direct stance in assisting her brother in Rome, managing a brothel and officially joining the Assassin Brotherhood. 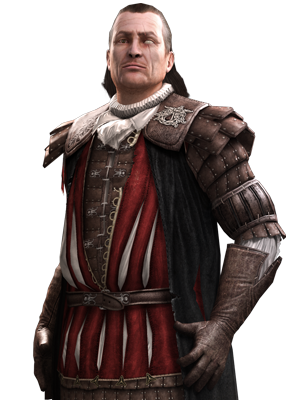 "The Templars seek dominion over man. And we, the Assassins, are sworn to stand against them."

Ezio's uncle, he commands a large number of mercenaries from his villa in Tuscany. He is the leader of the Italian Assassins. 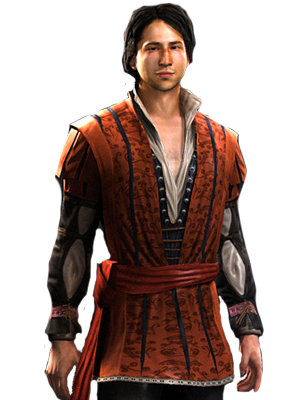 Ezio's elder brother, and the eldest of the Auditore children. He had recently begun training to be an Assassin, but was executed at the end of Assassin's Creed II's first sequence alongside Giovanni and Petruccio. 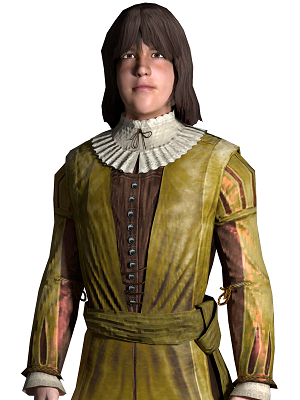 Ezio's younger brother, and the youngest of the Auditore family. He collected feathers for some unknown purpose, likely as a gift for their mother Maria. Petruccio is executed at the end of the first sequence of Assassin's Creed II, alongside Giovanni and Federico. 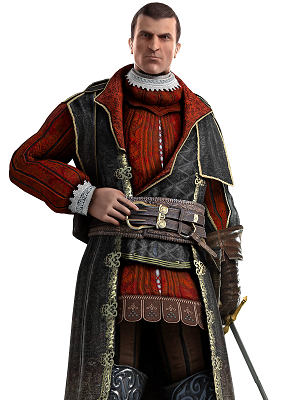 "I intend to write a book about you one day."

"Rare is the man who is willing to oppose the status quo. And so it falls to us to help them see the truth."

A famous Florentine writer, philosopher, and diplomat, Machiavelli assisted Ezio during both the Battle of Forlì and the Bonfire of the Vanities and became his chief advisor in Rome during Brotherhood. 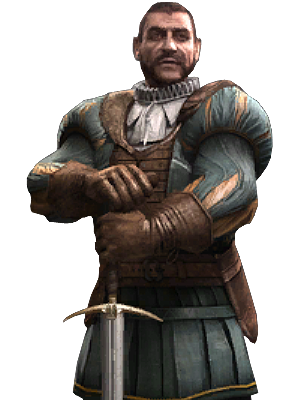 "My Bianca hungers for more skulls to crush!"

"Luridi codardi! I'll take you all on! At the same time! With one arm – no – BOTH arms tied behind my back!"

An Assassin and condottiere (mercenary leader) who Ezio Auditore rescues in Venice. Later becomes a major ally to Ezio in Brotherhood. 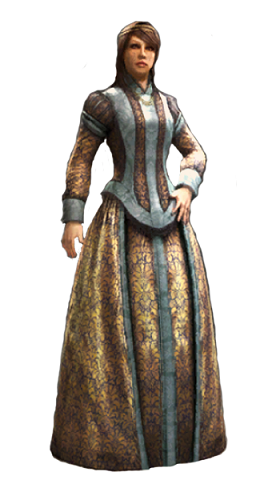 "Mio marito vi ammazzerà tutti!" note My husband is going to murder all of you!

"He has such an aggressive view of the world. However, strategy is equally important."

The wife of Bartolomeo d'Alviano, Pantasilea helps him in his duties as an Assassin and manages assassination contracts in Rome. 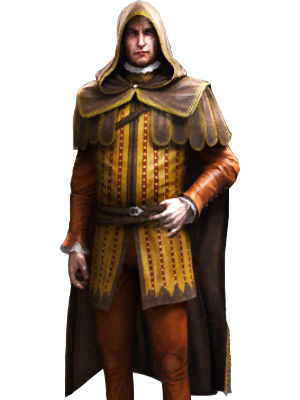 "They call me many things: Murderer, Tagliagole, Thief... But you may call me La Volpe."

The leader of the Florentine thieves and an Assassin, he moves to Rome during Brotherhood, becoming a major ally for Ezio. 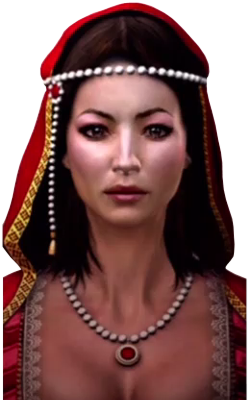 "We must walk the streets freely: seen, but unseen."

"I too know betrayal."

The madame of a Florentine brothel, she protects Ezio's family after they are betrayed, teaching Ezio how to use his hidden blade and disappear in the crowd. 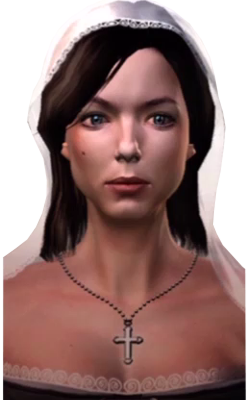 "Men hold God as an idea in their heads, not in the depths of their hearts and bodies. Men must know how to love in order to reach salvation. My girls and I provide that to our congregation."

Also known as Sister Teodora, she is the former member of a convent and the madame of the La Rosa Della Virtù, "The Rose of Virtue", in Venice. She assisted Ezio in assassinating Templar Doge Marco Barbarigo. 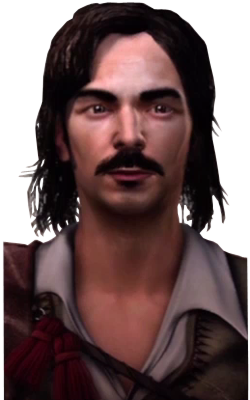 "Ezio, who are the true nobles of Venezia? Men like Carlo Grimaldi and Marco Barbarigo? No! I say we are; the thieves and mercenari and whores."

The leader of the Thieves Guild of Venice and an Assassin, he assisted Ezio in fighting the Templar presence in the city.

"I have spent so much time with Lucrezia lately that I have been neglecting my work. I know the importance of my task, but each day I am finding it harder to care."

A skilled Assassin assigned to spy on the Borgia by serving them as a courier. He is a viewpoint character in Project Legacy. 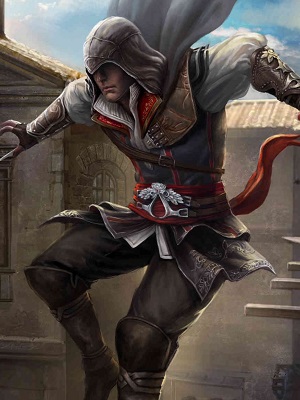 "Someday I will take the time to create, to paint, but not now. For now, I am a soldier on the front lines."

A Italian painter and secret member of the Assassin brotherhood. He was Perotto's student before joining the Assassins sent to kill his former mentor, after which Francesco was sent to Rome to train under Ezio, eventually becoming a Master Assassin.

An African member of the Assassin Order and member of Francesco's team.

"Tessa has a disturbing love for venom. She is so precise in her work that she can paralyze a man, put him to sleep, cause him to go mad, fake his death, or, of course, kill him in various horrible ways."
—Francesco Vecellio

A Italian Assassin and member of Francesco's team. 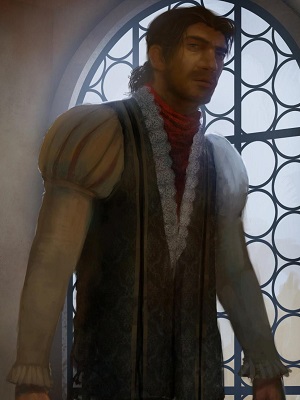 "With everything I know, what I have personally witnessed, I marvel at the endless sea beneath our ship. What secrets lie lost below? Relics? Cities? Answers?"

The bastard child of Perotto Calderon and Lucrezia Borgia in Project Legacy. Was raised to be a prick by his uncle (posing as his father), but later switched sides. He accompanies Hernán Cortés and his conquistadors to South America after being assigned to hunt for a Crystal Skull. He spent the latter years of his life studying the First Civilization and their artifacts with the assistance of his wife Maria.

"Never in my life have I felt so passionate about anyone. I would follow this man to Hell!"

An assistant to Swiss scholar Bombastus, Maria met and assisted Giovanni Borgia in his hunt for the Book of Abraham, eventually marrying him. Although never joining the Assassin Order herself, Maria assisted her husband in his work researching the First Civilization. 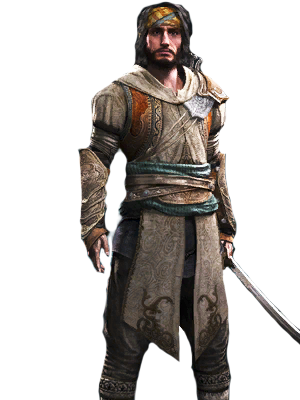 "You are the man I've longed to meet. Renowned Master and Mentor, Ezio Auditore de la-la-la!"

"Welcome to Galata district. For centuries it has been a home to orphans from Europe and Asia alike. You won't find more diversity anywhere else in the city. And for that reason, Assassins make it their home."

The leader of the Assassin Brotherhood of Constantinople. He is a former thief who was recruited into the Brotherhood by former guild leader Ishak Pasha. 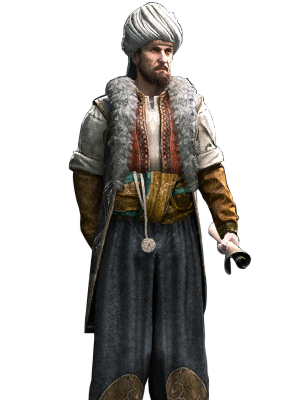 An Ottoman naval commander and expert cartographer, Piri Reis is also a Master Assassin. He prefers not to engage foes directly, instead providing bombs and technical information to the Brotherhood. 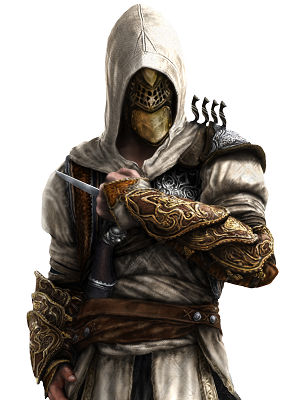 An Ottoman Assassin, and one of Yusuf's most trusted lieutenants.

A Dutch scholar, humanist, Catholic priest, and theologian, Erasmus was secretly the head of the Northern European Assassins. As such, he maintained a close correspondence with the Italian Assassins.