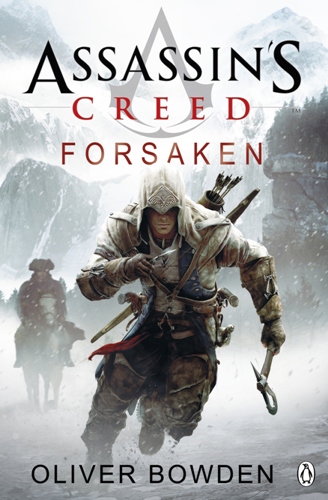 "I never knew him. Not really. I thought I had, but it wasn't until I read his journal that I realized I hadn't really known him at all."
"I hope that Connor, my own son, will read this journal, and perhaps, when he knows a little about my own journey through life, understand me, maybe even forgive me. My own path was paved with lies, my mistrust forged from treachery. But my own father never lied to me and, with this journal, I preserve that custom."
— Haytham Kenway
Advertisement:

Assassin's Creed: Forsaken is part of the series of novelizations of the Assassin's Creed series of video games by Oliver Bowden. Unlike other books in the series which tend to hew to the timeline and narration of the events of the respective games it adapts, Forsaken covers the events of Assassin's Creed III but also serves as a Prequel, covering the timeline before the first missions of the game proper. Specifically, it's Another Side, Another Story to the game, from the viewpoint of Haytham Kenway, the father of the main Player Character, Ratonhnhaké:ton or Connor of IIInote Haytham was the Decoy Protagonist for the first three memory sequences which detailed the circumstances that led to his romance with Connor's mother Kaniéh:tiio.. The book is presented in the form of a journal Haytham kept since childhood and which he irregularly updated throughout his life. The final part of the book has Connor completing the story with his own reflections on discovering his father's story.

After the release of Assassin's Creed IV: Black Flag and Assassin's Creed: Rogue, Forsaken along with Assassin's Creed III covers the Myth Arc of the Kenway Family Saga, described by writer Darby McDevitt as, "the story of a family… a migration, a mixing of cultures, and a dashing of ideals…".