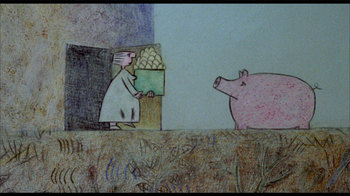 The Hill Farm is an animated short film (18 minutes) from 1989 directed by Mark Baker.

The setting is, well, a farm on a hill. The household consists of husband-and-wife farmers and their large, lazy farmhand. Roosters hump hens, pigs devour huge piles of food in a single bite, and occasionally the wife snaps a chicken's neck before having it for dinner. There's a bear nearby that is big enough to kill Godzilla, but it seems to pose little threat to the farm.

Two groups of interlopers disturb the peace of the farm. First there's a group of four tourists, who seem to be hippies (one strums a guitar). They intrude on the farm and bother the farmers before going into the wrong cave and disturbing the bear. Worse are the hunters in red coats, who come riding in on horseback on a fox hunt

. After the poor fox is torn apart by dogs, the hunters wind up antagonizing the bear, threatening to bring its wrath down on the whole farm.