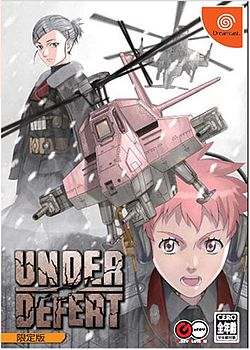 Featuring tilting helicopters and a Nazi-esque Empire as the forces of good.
Under Defeat is a Vertical Scrolling Shooter by G.rev, the same development team behind Border Down and the Senko no Ronde series. It was released for arcades in 2005 on the Sega NAOMI hardware, ported to Sega Dreamcast in 2006, and ported to additional platforms from 2012 through 2014.
Advertisement:

The Empire and the Union are in the midst of a long-standing war, and it seems that a ceasefire is to take place soon. However, just days before the ceasefire, the Union prepares new weapons and gears up for more combat, forcing the Empire to fight back.

The game plays like a typical vertical shooter with 3D graphics and a tilted perspective, with a few twists. When not firing, you can tilt your helicopter up to about 30 degrees in either direction to fire at offset directions. You also have an Option that can be charged up by releasing the fire button and letting the Option gauge fill up, at which point the Option will seek out and fire at targets for bonus points; your Option can alternate between three different types (gun, cannon, rocket) through powerups.

In 2012, G.rev released Under Defeat HD on PlayStation 3 and Xbox 360. Under Defeat HD is an Updated Re-release featuring a new mode, the New Order mode, which uses a 16:9 game window, adds a few more tweaks such as dual-analog controls, and features an arranged soundtrack. Under Defeat HD was released in Japan, the United Kingdom, and North America (on PS3 only) in 2012, throughout the rest of Europe in 2013, and in North America on Xbox Games on Demand in 2014.

Under Defeat provides examples of the following: