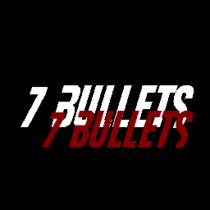 "Seven bullets I'll give to God when I go to heaven, when he asks me to answer for my sins. I'll empty them all into his head, and ask him to answer first."
— Jones.

Set 12 years after the events of the original game, Seven Bullets again tells the story of Jones, an USM commando who solely survived the Skaarj onslaught on planet Xidia. Now Jones is sent do planet Na Pali to retrieve a data tempelate from downed ISV Kran, which is now overrun by the Bloodpack Skaarj clan.

Seven Bullets is a single player mod for Unreal Tournament made by Team Red Nemesis. It features several revmaped classic maps along with few made from scratch. Classic UT weaponry got redesigned, including more lethal versions of the Enforcer sidearm, Ripper, and even adding working Quadshot from beta versions of Unreal.