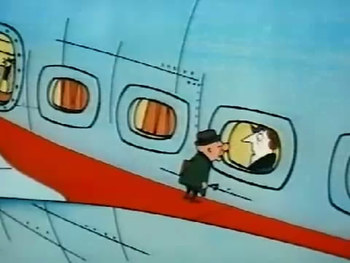 William Shatner had it worse
Advertisement:

When Magoo Flew is a 1954 animated short film produced by United Productions of America and directed by Pete Burness.

It stars, you guessed it, Mr. Magoo. In this cartoon, Magoo, voiced as usual by Jim Backus, goes out to see a movie, specifically a 3-D Movie. Magoo, being basically blind, walks right past the movie theater and instead winds up at the airport. He gets a "ticket" from a guess-your-weight machine and blunders his way onto a plane, still thinking that he's in a movie theater. A Real Life drama then plays out as Magoo finds himself sitting next to a bank robber.

The title was later borrowed for a book about the history of UPA itself.