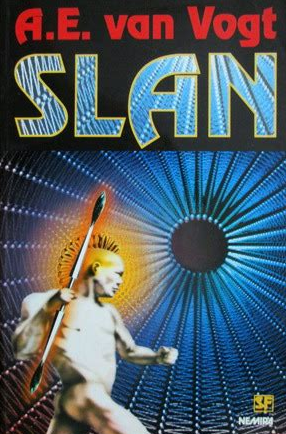 A 1940 Science Fiction Patchwork Story by A. E. van Vogt about a boy from a race of telepathic mutants who must survive human hatred long enough to save his people.
Advertisement:

Jommy Cross is a Slan, (condensed from Samuel Lann, the discoverer or creator of the subspecies), a mutant gifted with golden tendrils that give him telepathic abilities, stronger, smarter and faster than normal humans, and blessed with remarkable recuperative abilities. Which sounds really cool, but Jommy has a couple of handicaps. One, he's only nine years old, and thus only superhuman in proportion to normal nine-year-olds. And it just so happens that the normal humans hate all Slan and are determined to wipe them out.

In the first chapter, Jommy's mother sacrifices herself to give Jommy the chance to escape. Jommy is then taken in by the loathsome but calculating "Granny", who plans to have the boy steal for her with his inhuman abilities. Shortly after this, Jommy runs into people who detect to his psychic abilities as Slan—but have no tendrils or telepathic abilities of their own. Making contact turns out to be a mistake, as the Tendrilless hate both humans and the True Slan.

Now hunted by both the humans and the Tendrilless, Jommy must hide for years until he can come into his full powers and claim the scientific wonders that are the legacy of his father.

Meanwhile, Kathleen Layton, who is as far as she knows the last Slan living in captivity, is being raised in the palace of Kier Gray, the President of Earth. Supposedly, he's only keeping her alive for scientific study, and treats her coldly, but he also intervenes each time Kathleen is about to be sentenced to death. Very puzzling.

Eventually, Jommy and Kathleen do meet, but don't stay together very long before disaster strikes. Jommy goes on to more adventures before finally being captured by the Tendrilless on their secret Mars base. Escaping, Jommy then speeds to Earth for a final confrontation with Kier Gray, and a series of startling revelations that change everything!

While Slan was not van Vogt's best work, it was exciting, full of intriguing ideas, and caught the imagination of science fiction fans of the day. Mocked and persecuted for their choice of reading matter, SF fans identified with the highly intelligent Slan. "Fans are Slans" became a rallying cry for a certain segment of fandom.

Influences from Slan can be seen in works ranging from the X-Men continuities to Toward the Terra.

In 1984, A.E. van Vogh started a sequel to Slan, but was unable to complete more than an outline and partial draft before he was struck by Alzheimer's disease. After his death in 2000, his wife Lydia and Kevin J. Anderson finished the book and it was realeased in 2007 as Slan Hunter.

Slan Hunter begins only twenty-four hours after the end of the previous novel, when disaster after disaster strikes before Jommy and his allies can use their newfound knowledge to prevent it. Most of the major characters return, along with a new viewpoint character, Anthea Stewart, a seemingly ordinary woman who has just given birth to a Slan baby, marking her and the child for death.

The story continues the breathless pace of its predecessor (with perhaps a bit more lull to explain some of the backstory) and while it ties up most of the loose ends, ends with a Cliffhanger that was obviously meant to be a Sequel Hook.

Tropes seen in Slan and Slan Hunter include: