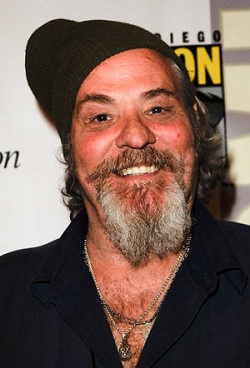 "I'm just thinking of changing my name to Earl and Harlan. I think I've played a half a dozen of each one."
"With a face like this, there aren't a lot of lawyers or priest roles coming my way. I've got a face that was meant for a mug shot and that's what I've been doing for the past thirty years. If I play a cop, it's always a racist cop, or a trigger-happy cop or a crooked cop - but by and large I play cowboys, bikers, and convicts."

Michael Connor "Mike" Gainey (born January 18, 1948 in Jackson, Mississippi), better known as M. C. Gainey, is an American film and television actor. He is also a professional 'That Guy', who often gets cast as villains, criminals and Corrupt Hick types due to his height (6'2) and his badass facial hair. Chances are, you've seen him in a hundred things without realizing it. Gainey is possibly best known for his roles as Swamp Thing in Con Air, Murdock in Wild Hogs, Tom Friendly in Lost and Bo Crowder in Justified. He appeared as retired cop Ryan Rodgers in the fifth and sixth seasons of Bosch.