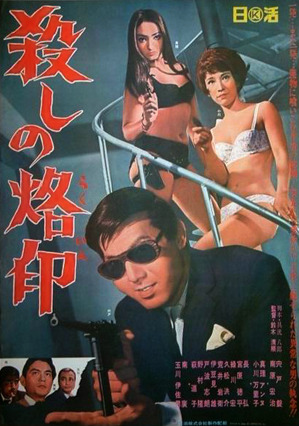 The #3 killer in Japan becomes the target of the #1 killer after botching his latest assignment.

This 1967 film got legendary Japanese film auteur Seijun Suzuki fired by Nikkatsu studios, who complained that his movies "make no money and make no sense". It has since become a Cult Classic.

Goro Hanada, the #3 contract killer for the Tokyo mob, is obsessed with the smell of cooking rice. He falls in love with a woman named Misako, who recruits him for a seemingly impossible mission. When the mission fails, he becomes a target for the phantom Number One Killer, whose methods threaten Goro's sanity as much as his life.

Originally intended to be just another cheap formulaic Yakuza film, Nikkatsu studio was not happy with the original script, which they felt made little sense. So they brought in Suzuki to fix it — only to have him make it make even less sense. Pushing the formulas and conventions of the Yakuza genre to the point of absurdity and beyond, Suzuki turned it into a world where organized crime is almost like a professional sport, hitmen are ranked by numbers, and missions are seemingly chosen entirely for their potential to produce cool action sequences.