Film / Brand Upon the Brain! 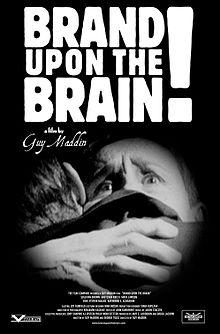 Brand Upon The Brain! is a 2006 Canadian art film by Guy Maddin.
Advertisement:

Protagonist Guy Maddin returns to Black Notch island, where he grew up alongside an orphanage run by his mother and father, to put a new coat of paint on the lighthouse to appease his mother. The film consists of twelve labeled chapters, most set back in Guy's childhood, dealing with a mother who spies on the island from the lighthouse, the "aerophone" invention he always carries which lets his mother contact him from any part of the island through the power of love, his burgeoning feeling for Sweet Polly Oliver Chance/Wendy, girl detective, the love triangle between him, his sister, and Chance, a sinister scheme involving harvesting "nectar" from the orphans... it's a strange movie, really.