Series / Beyond the Walls 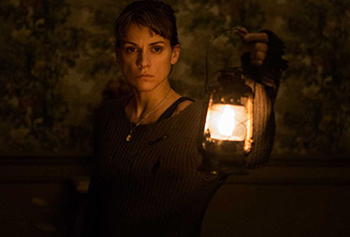 Lisa explores her new home
"What did you do to be in the house?"
Beyond the Walls (original title: Au-delà des Murs) is a 2016 three-episode Mini Series directed by Hervé Hadmar and starring Veerle Baetens in the main role.
Advertisement:

The young and reclusive speech therapist Lisa unexpectedly inherits an old house from a man who died thirty years ago and mentioned her in his will. Despite being unnerved by inheriting such a prize from a man she has never heard of, she takes on the challenge of renovating the decrepit building and moves in. While she is working on the house, she sometimes hears noises that seem to come from beyond the walls of her new home.

The mysterious noises grate on her nerves until she one day decides to take matters a step further and uses a hammer to violently break through one of the walls that she believes the noises originate in. What she finds behind the wall comes as a surprise: In a small corridor between the walls of her home, there is a door hiding a staircase that leads to an elaborate series of cellars that no blueprint of the house shows.

When Lisa goes spelunking in the candlelit dark, she soon finds out that she is lost, as the staircase she used to climb down into the maze seems to have disappeared, leaving her alone with the strange creatures that wander its unending hallways.