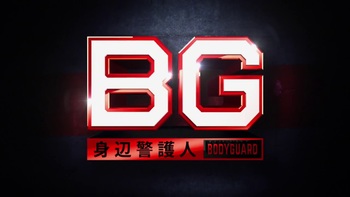 The world changes drastically overnight.
Those who can stand up to it are professionals with the right skills.
The need for protectors has arrived...
— Season 2 Opening Crawl
Advertisement:

BG: Personal Bodyguard (BG～身辺警護人～ or BG: Shinpen Keigonin) is a 2018 Japanese television drama that previously aired on TV Asahi. Directed by Jota Tsunehiro and Go Shichitaka with the story written by Yumiko Inoue, it stars Takuya Kimura, Yosuke Eguchi, Takumi Saito, Nanao, Shotaro Mamiya, Takaya Kamikawa and Yuriko Ishida. The show ran for two seasons and it's available in and out of Japan by Netflix.

The first season starts in 2012 where Akira Shimazaki, a veteran close protection officer with a private security company is assigned to protect rising soccer star Junya Kono when a mysterious incident in the airport that started with a fallen bolt left Shimazaki disgraced by his colleagues and the public in the private security industry, forcing him to take a low level position at Hinode Security Service as a traffic officer as of January 2018. But after HSS president Shigenobu Imazeki announces the establishment of a close protection division within the company and wants Shimazaki to be in it, it seems that it would be his one-way ticket to redeem himself as the division secures contracts to protect VIPs from various threats that the Security Police Division of the Tokyo Metropolitan Police Department can't do due to (mostly) department policies on who is able to get protection.note The SP can protect civilians when designated by the head of the Public Security Bureau.

And one of his first close protection assignments gets Shimazaki involved indirectly with Aiko Tachihara, the current head of the Ministry of Health, Labour and Welfare, the very same woman he encountered on a HSS roadblock while doing the night shift...

The second seaon starts in 2019, 7 years after Akira and the others were recruited to work with KICKS GUARD, a new security company established by Chinese-Japanese national Ryu Komei after a botched home invasion killed his fiance in LA. However, Akira saw dirty money being passed by a politician's secretary to a hired gun to attempt an assassination to get his ratings up. He gets disgusted and goes solo to start his own private security company where he's not beholdended by red tape, corruption or favoritism.