Literature / Catherine and Her Fate 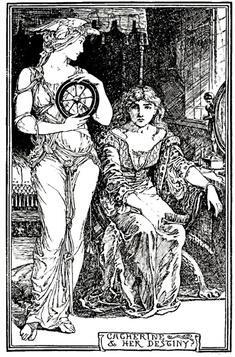 Catherine was the very beautiful daughter of a rich merchant. One day, a woman visited her and asked whether she would rather be happy when young or when old. She concluded it would be better to get it over with and be happy in old age. The woman, who was her Fate, vanished. Soon, her father lost all his money and died. Realizing this was the unhappy part, she tried to get a job, but her Fate kept appearing and ruining it for her. Seven years later, she managed to get a job as a servant and keep it. One of her tasks was to bring bread to her mistress's Fate.

Her mistress found out why she was always crying, and told her to ask her mistress's Fate whether she could be freed. She did, and that Fate brought her to her own, who gave her a hank of thread. Catherine thought to throw it away, it was so useless, but her mistress urged her to keep it.

One day, the young king was to marry, but a hank of thread was needed to sew his wedding garment — no thread in the kingdom had the proper color. It was just the color of the thread that Catherine's Fate had given her, and the king declared she would be rewarded with an equal weight in gold.

But when it was put in a scale, no matter how much gold they put on the other side, it outweighed it, until the king had all his treasury on the other side, and threw down his crown as well. He demanded that she tell him how she had come by it, and she told her story. A wise lady of the court declared that it was time for her happiness to begin, and the crown showed that it was her fate to be a queen. The king declared she would be his, and married her instead of the original bride.

This tale is a Gender Flip of a common plot of Chivalric Romance, the Man Tested by Fate, who, having been given a similar decision, made the same choice. Also, a few tales have a married couple being given the same choice - the rest of the story normally has them split up for a decade or two. Another variant, recorded by Italo Calvino, doesn't have the choice part - it's about a princess who merely gave bad luck to both herself and whatever house she entered. The problem is finally solved by giving the girl's Fate a literal makeover.