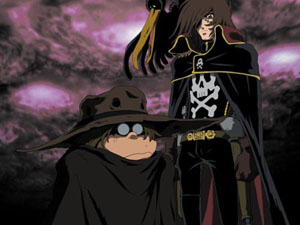 Alice and Bob are your ordinary action cartoon protagonists, drawn perhaps between five and seven heads high: not quite a Heroic Build, but roughly approximating real life proportions. The audience is meant to empathize with them, so their appearance is pretty typical as humans go, and so is that of most of their friends.

But here comes their good pal Charlie, and something's off about him. He's not quite a Gonk, but his looks are totally at odds with the style in which Alice and Bob are drawn — he's anywhere from just a single head shorter than the "normal" characters, to a mere one head tall. His face is drawn in a more comical style, with some features exaggerated beyond the norm, with a Gag Nose or beady eyes where other characters have petite noses and wide eyes. Although he stands out at first, there are other characters here and there who match his design standards, so he's not an example of Non-Standard Character Design, especially since Alice and Bob don't seem to see anything unusual about his appearance. In short, Charlie is a Cartoonish Companion.

Cartoonish Companions are distinct from Super-Deformed types and other Fun Size characters in that they are rarely deliberately cute, and although some gags may play on their diminutive stature, their looks are rarely noted as anything unusual within their world.

They are often Sidekicks or Plucky Comic Relief. Miniature Senior Citizens is a subtrope.