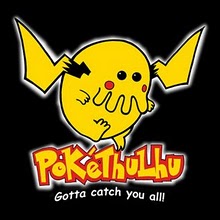 Somewhere between "D'aww" and "DEAR GOD"
Ever wonder what happense when Jigglypolyp goes head to 'pod with Dagong? Want to solve the mystery of why cute girls named Librarian Lumli work in every Cult Library—and why they always look the same? How does stomping to the piping music of the Blind Idiot Monster Pokethoth sound?
Advertisement:

A tabletop RPG Affectionate Parody of both Pokémon and the Cthulhu Mythos. Created in 2000 by S. John Ross and John Kovalic (whose art may seem oddly familiar), Pokethulhu consists of a 30-page sourcebook which contains brief instructions for creating player characters (known as Cultists) and Pokethulhu (also known simply as "thulhu"), as well as a simple battle system, a few campaign ideas and a sample adventure.

Pokethulhu takes as its central conceit the existence of a fictional television show by the same name (as seen on the Lovecraft Network). Players step into the role of Cultists, venturing out into the world with a Pokenomicon and a handful of Shining Dodecahedrons in order to tame and train the mysterious and powerful creatures that give the game its name. Along the way, they might foil the plots of Team Eibon, or discover the secrets of the Nameless City, or even meet Pokethulhu of legendary and unimaginable power (although this is considerably more dangerous than in the more kid-friendly original).

It is mostly a Deconstructive Parody, using its two subject as an enlightening answer to each other: eldritch knowledge is mostly going to interest kids with too much time on their hands, while from the point of view of adults youngsters traveling around to fight with monsters form a hostile and sinister counterculture.

The third edition can be downloaded for free from this webpage.