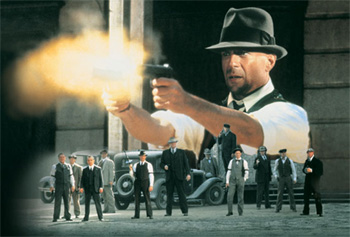 "In a town with no justice, there is only one law: Every man for himself."
Advertisement:

Last Man Standing is a 1996 action film by Walter Hill, a cross between a Western and a hard-bitten Film Noir tale taking place in a dusty ghost town during Prohibition and effectively straddling the transitional period between the two.

"John Smith" (Bruce Willis) is a wandering gun-for-hire with few morals and a lot of ammo for his pair of .45s. The town, despite being a tiny speck in the middle of nowhere, is home to two fairly large ethnic gangs comprised of Doyle's Irish and Strozzi's Italians, as the town makes a convenient place to smuggle alcohol in from across the border. John immediately makes an impression on Irish gang leader Doyle (David Patrick Kelly) by blasting the hell out of his best man Finn (Patrick Kilpatrick), and he is soon deeply caught up in the bitter and heated gang war. His presence does nothing to prevent tensions from getting out of hand. He befriends the town's barkeep (William Sanderson) and forms a sort of working relationship with the already corrupt sheriff (Bruce Dern), determined to milk the situation for all it's worth, but in the process finds himself helping out the girlfriends of the two gang leaders. Eventually he's informed by a Texas Ranger (Ken Jenkins) that the law will abide one gang in town, but not two, and when he returns in a few days' time there had better be one gang or no gangs, but definitely no John Smith.

The plot is bringing the "Fistful of Rehashes" trope full circle to The Roaring '20s, being based on A Fistful of Dollars, which was a Setting Update of Yojimbo, which was originally inspired by Dashiell Hammett's 1929 Red Harvest. Unlike Fistful, however, it was an officially authorized remake of Yojimbo (which was one of the snags Fistful struggled with when it got released).