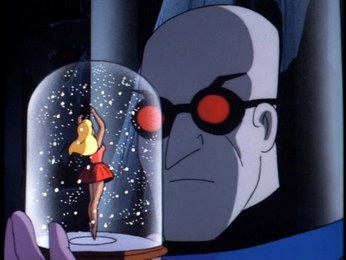 "Rest well, my love. The monster who took you from me will soon learn that revenge is a dish… best served cold."
Batman: My God.
Mr. Freeze: Yes. It would move me to tears… if I still had tears to shed.
Advertisement:

The episode opens with a closeup of a snow globe with a spinning ice skater in the middle. A red-goggled figure in a strange suit laments that this is how he remembers "her", and that he plots to get revenge on the monster that took her away from him.

Cut to a newscast by Summer Gleeson, reporting the latest in a series of cold-related crimes on Goth Corp facilities during the hottest August in Gotham history. Witnesses said that the attacker used a freezing gun. Goth Corp CEO Ferris Boyle says that his company is willing to listen to what the attacker wants. Batman watches the newscast while analyzing these crimes. He had gotten information from the police earlier about what was stolen from each facility, and his computer has determined that each device stolen can be put together to create a weapon that generates intense cold. There is just one component missing, and only one Goth Corp facility makes it.

At this facility, a truck with the same figure and henchmen drives through security, with the Batmobile in close pursuit. The villain then uses his freezing gun to freeze the road so that the Batmobile skids, so Batman, with quick maneuvering, grapples on to a pole and stops the car. At the factory's warehouse, the figure and his henchmen steal certain canisters. Batman then drops in and takes out the henchmen and commands the villain to freeze, at which point he reveals his name: Mr. Freeze. Batman engages Mr. Freeze in combat. One of the henchmen accidentally gets hit in the legs by the freeze ray, and Freeze is able to use the cold gun to shatter a catwalk underneath Batman, causing him to fall and become incapacitated. Mr. Freeze makes a quick getaway, telling his henchmen to leave the one whose legs got frozen. Batman recovers and takes the unlucky henchman to the Batcave.

In the Batcave, Batman places the henchman in a hot chemical bath where his legs can recover. He is able to heal, but Batman isn't feeling so good himself; he caught a cold during the fight. He says that he can't worry about that right now, since Bruce Wayne has an appointment with Ferris Boyle. Bruce asks Boyle who would make attacks on Goth Corp. Boyle describes one man who could possibly hate the company—if he was still alive, of course. One employee, a scientist, was using Goth Corp equipment for personal reasons, so Boyle called company guards to arrest him, but there was an explosion and they lost the employee. Boyle doesn't seem too heartbroken over this; he says that he can't have "wage slaves" acting like they own the place. Boyle gets a call that his next appointment has arrived, explaining that Goth Corp is hosting a ceremony for the Gotham Humanitarian Industrialist of the Year Award, which Boyle has won. Bruce quietly expresses his disbelief, then congratulates Boyle, assuring him it's well-deserved.

From his sub-zero lair, Mr. Freeze watches the ceremony, then shoots the TV, saying that "she" needed compassion and charity, but didn't get any. He then directs his henchmen to build his freezing cannon.

Back in the Batcave, Batman remembers a newspaper headline that described an explosion at a Goth Corp facility, but the headline describes the explosion as caused by a leak, and Batman deduces that it was just a cover up. Batman heads to Goth Corp, in disguise, to investigate their secret files for further information. He finds a file on a woman named Nora Fries, which has a videotape of her husband, Dr. Victor Fries, describing a cryogenic chamber of his own design that he created to save people from terminal illness—including Nora herself. However, the tape shows Ferris Boyle barging in with some Goth Corp guards. Boyle demanded that the project be shut down because it was putting him in debt, heedless of the frozen woman in the chamber, who would die if the power was cut off. A protesting Fries tried to pull a guard's gun on Boyle, but Boyle convinced him to back down with an offer to discuss things before kicking him back into several chemicals that froze him. The tape ends there, and Mr. Freeze suddenly appears behind an appalled Batman, shooting him with his freeze gun.

Batman is later seen frozen to the ceiling in a cave with snow falling, as Mr. Freeze talks about how beautiful the snow is, and how vengeance is cold. Batman deduces that Mr. Freeze's suit is the result of having been bathed in the coolants, and Freeze confirms it, saying that he can no longer survive outside of sub-zero temperatures, never again to feel the warmth of the sun, or the touch of another human hand. Mr. Freeze describes how he is going to take revenge on the man who ruined his life, and Nora's also, ignoring Batman's objections that the giant freezing cannon will also kill everyone else in the building.

Leaving Batman hanging in his lair, Mr. Freeze proceeds to enact his plan to take revenge on Boyle. He blasts the Goth Corp building using his giant freezing cannon. Batman is able to escape, however, and after he stops the freeze cannon, Mr. Freeze simply goes into the party in order to personally settle his vendetta with Boyle. Freeze reminds Boyle of who he is, and after Boyle begs him to stop, he reminds Boyle that in his dreams, he sees Nora begging to be saved. Batman then goes to fight Mr. Freeze in hand-to-hand combat, but initially has a hard time because Freeze's suit enhances his strength. Batman defeats Mr. Freeze by pouring a thermos of hot chicken soup (which Alfred had given him earlier to help with his cold) over Freeze's helmet, cracking it and exposing him to the warm August air. Freeze falls to his knees, gasping for breath, his strength gone. Batman gives the tape of Boyle ruining Victor Fries's life to Summer Gleeson, so that the world may know that Ferris Boyle is not the man everyone thinks he is. Batman's parting line to a shivering Boyle is "Goodnight, humanitarian."

Freeze is incarcerated in Arkham Asylum in a special cell that keeps him at sub-zero temperatures, holding his snow globe with a skater in it. He cries to himself, saying that he failed Nora, and begs her forgiveness. Batman sympathetically watches him from atop an adjacent building, and walks away.