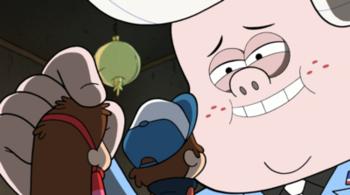 "Why Mabel, I wouldn't hurt a hair on your itty-bitty head-
if you agree to be my queen!"

Li'l Gideon, still fuming over his previous defeat, decides that the best revenge against the Pines Family is taking the Mystery Shack. However, Stan is too wily to be tricked, and too hard and cynical to be threatened by supernatural means.

Meanwhile, Dipper learns that Mabel has become (very slightly) taller than him, not helped by a slew of short jokes at his expense. Reading in Journal 3 about a place in the forest where animals change size, Dipper finds crystals that grow and shrink things depending on what side light is shone through, and makes a flashlight that can change his own height. Mabel finds out, and the twins fight for the flashlight- causing it to fall into Gideon's hands. Gideon shrinks the twins down and kidnaps them, but his attempt at ransom fails because Stan doesn't believe Gideon over the phone. Gideon decides that all he needs to do is shrink Stan himself, and take the Shack by force! While the twins escape and try to stop Gideon, Dipper learns why Mabel was so happy to be taller than him- She's felt that he's Always Someone Better, and that she wanted to have an edge for once.

At the Mystery Shack, Gideon confronts Stan in his less-than-stellar Mirror Room, but before he can use the flashlight, the twins use their shrinken size to get into Gideon's suit and tickle him, causing the villain to be incapacitated with laughter. Confused, Stan just pushes Gideon out of the Shack, causing him to drop the flashlight. The twins return to their normal sizes, meaning Mabel is still one-milimeter taller than Dipper, but now the brother is okay with it.

Back at the Gleeful house, Bud tries to console his son that he'll get revenge some other way. But Gideon wants more than revenge; he wants the Mystery Shack property because it holds a secret you couldn't possibly imagine...!