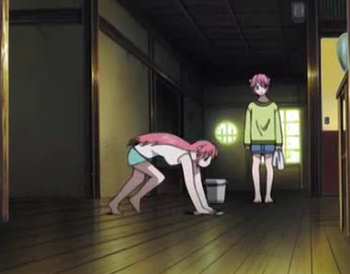 A Japanese Visual Arts Trope. Rather than using mops, the characters take a wet towel in their hands, put it against the floor, and run back and forth putting pressure on it. Looks unusual to Westerners in that their backs are straight while their legs are running; most Westerners would either be on their knees scrubbing, or use a mop.

Often a Genki Girl or other energetic character is shown running insanely fast while doing this.