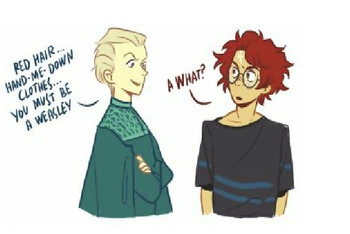 Be Careful What You Wish For there, Draco
Advertisement:

is a Harry Potter fanfiction by mugglesftw.

The brainchild of an image macro that circulated the Reddit Harry Potter Fanfiction board, the story posses the very important question of what would happen if Harry was born with red hair instead of black? The answer? Hilarity Ensues. Quite a few reddit memes and suggestions have made their way into the story, from the basilisk speaking in snek tongue to someone realizing he's surrounded by Weasleys. The story toes the line between humor and an out and out Crack Fic, though a strong narrative of family being important and Harry overcoming challenges through the aid of the Weasley clan.