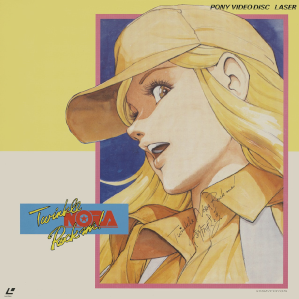 I shouldn't have to point this out when talking about an anime, that anime, has to be—you know— animated. It's like, right there in the name.
Kenny Lauderdale, during his review

The second OVA adaptation of the Nora manga (not to be confused with the Weekly Shōnen Jump series of the same name), Twinkle Nora Rock Me! was released in November 1985—just 10 months after the previous one. Unlike the previous OVA, Rock Me! was developed by the manga's creator Satomi Mikuriya on an astoundingly low budget, with Limited Animation at various points throughout, with the Action-Hogging Opening scene

and the infamous "dance" scene

being the most notable examples.

The plot revolves around the eponymous character, Nora, a Bounty Hunter with Psychic Powers. After busting a notorious criminal, she gets a $10,000 check from her boss, only to burn it and laugh, noting that she has other intentions than making money, such as learning more about her powers. Afterwards, she heads to Planet Dazzle to fight Fuuchiro due to the $1,000,000 bounty on his head. After getting into a Bar Brawl with the villain's younger brother, Touchino, she befriends a miner named Max. Nora attempts to coax Max into revealing the location of Fuuchiro...by making some music with makeshift drumsticks. One trippy dance sequence later and he agrees to go with her. Then Nora and Fuuchiro have a climactic final fight that essentially boils down to "My Psychic Powers Are Stronger Than Yours". One celebratory music number and possible Sequel Hook later and roll credits.

Rock Me! didn't make much of a blip when it was first released in 1985, but eventually became memetic in 2019 when YouTuber Kenny Lauderdale

posted clips of the anime on his channel. The quality of the animation made it rather infamous among the anime crowd, with some people even going as far as calling it the Japanese equivalent to Hammerman due to the sheer choppiness of its animation. Interestingly, this OVA was animated on a computer, long before digital ink and paint became the norm for the industry.

Nora Does the Endless Loop

Twinkle Nora Rock Me! is already infamous for its incredibly Limited Animation, but the cave dance scene truly takes the cake. It only gets worse when the OVA forgets about the concept of in-between frames.

Example of:
Everybody Do the Endless Loop

Nora Does the Endless Loop

Twinkle Nora Rock Me! is already infamous for its incredibly Limited Animation, but the cave dance scene truly takes the cake. It only gets worse when the OVA forgets about the concept of in-between frames.