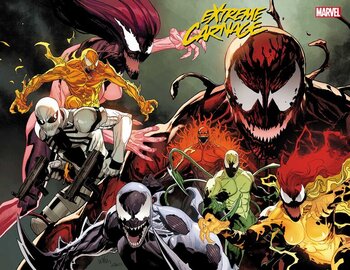 Extreme Carnage is a 2021 Marvel Comics miniseries launched as a follow-up to Absolute Carnage, Scream: Curse of Carnage, and King In Black; and being followed up by Venom (Ewing & Ram V).

In the wake of Carnage and Knull's attempts to conquer and/or destroy the Earth, humanity is now acutely aware of how dangerous symbiotes can be. Taking advantage of the growing climate of paranoia and prejudice, Senator Peter Krane, a charismatic but ruthless politician with ambitions of presidency, rallies the xenophobic Friends of Humanity organization to his cause. Alchemax establishes a paramilitary task-force of Guardsmen to hunt down any and all symbiotes — something that poses a problem for Scream (Andi Benton), the newly-resurrected Agent Anti-Venom (Flash Thompson), and the new Toxin (Bren Waters). Worse, Carnage — thought to have been killed once-and-for-all by Venom — endures as a codex within the Symbiote Hive and is plotting a resurgence involving the Life Foundation symbiotes Phage, Lasher, Riot, and Agony.

The series consists of:
Advertisement: