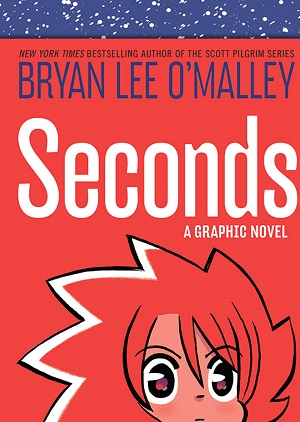 Seconds is a graphic novel by Bryan Lee O'Malley, of Scott Pilgrim fame. It was released on July 15, 2014.

The story centers around the heroine Katie, a talented chef, who runs the successful titular restaurant. Life is generally good for her, as she has grand ambitions of expanding her business to a second restaurant. However, things end up going awry in a big way, starting off with business ordeals bogging down the expansion. A chance encounter with her ex-boyfriend who left her on ambiguous terms also leaves her in distress. In turn it sours up a fling she has with one of her chefs, and all of it culminates with her inadvertently causing an accident, leaving a waitress hospitalized. All she wants now is a second chance, and she gets one when a mysterious girl shows up in her bedroom, granting Katie a notebook, a red-capped mushroom and a list of instructions.

The instructions she receives are as follows:

The next morning she finds that history has been revised and that the mistakes leading to the accident have been rectified. With this mysterious ability in hand, Katie continues to revise the past to work in her favor. But she soon ends up biting off more than she can chew upon the realization that she doesn't just desire a better life, but a perfect one. With that comes a slew of consequences, and she soon finds that defying the rules given to her comes at a heavy price she's not ready to pay.

In April 2022, a feature film adaptation was announced

to be in development at Disney. Edgar Wright, who previously adapted Scott Pilgrim to film is writing the screenplay and producing, while Blake Lively is set to make her feature directorial debut on the film.

No relation to the film of the same name.