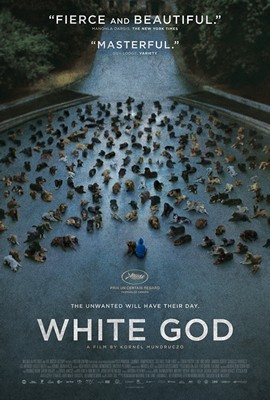 The Unwanted Will Have Their Day

White God (Fehér isten) is a 2014 Hungarian film directed and written by Kornél Mundruczó. The film centres around a mixed-breed dog named Hagen, and his owner Lili. When Lili's mother has to travel to a conference abroad, both Hagen and his owner are left in the care of Dániel, Lili's estranged father. Dániel shows an instant dislike of the dog and, when faced with the prospect of paying a hefty "mongrel tax" in order to keep him in the house, abandons him in a disused part of the city.

From then on, we follow Lili as she tries desperately to reunite with her dog, and Hagen as he tries to survive as a stray in a world that unfairly persecutes and stigmatises mixed-breed dogs. Eventually, Hagen attracts a massive following of stray and mixed-breed dogs who seemingly initiate a violent uprising against their human oppressors.

White God debuted at the Cannes Film Festival 2014, where it won the Un Certain Regard award. The canine cast of the film were also awarded the Palm Dog award and, through the film's adoption program, they all found new homes after the shoot.

Tropes present in White God include: