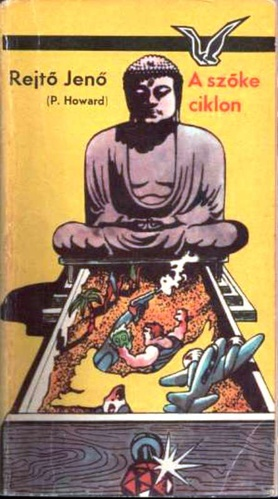 "The millionaire, pail in hand, halted for a second."
— The Opening Narration, about Jim Hogan

A comical adventure-thriller novel written by prolific Hungarian pulp author Jenő Rejtő (and one of the few of his works to be translated into English), The Blonde Hurricane (A szőke ciklon) tells the tale of one Evelyn Weston, an impoverished English girl who suddenly finds herself in the possession of a diamond worth one million pounds... if she can find it, that is.

The diamond in question belonged to Jim Hogan, an old convict spending a life sentence in Dartmoor Penitentiary, who got it as a gift from a Russian prince for smuggling him across the Polish border during the Russian Civil War. As his only rightful possession, he hastily hid the diamond inside a clay Buddha statue adorning a toiletries box just before he was arrested by the Scotland Yard. Before his death in prison, he wills the diamond to Evelyn, the daughter of his old schoolmate and the only person who cared for him after Mr. Weston died. The only problem is that the Buddha statue, made by a ceramics manufacturer, was sold to somewhere sixteen years ago, and thus it's near impossible to find it.

As Evelyn begins the search for the Buddha, she ends up trampling all over the life of the dour Lord Bannister, a celebrated scientist who she pulls into her adventure, and accidentally stumbles into an international case of espionage involving the disgraced Lieutenant Brandes and an undiscovered oil field in North Africa. Meanwhile, an escaped, ruthless criminal, Charles Gordon also attempts to get his hand on the diamond by tailing Evelyn with his cronies, and Eddy Rancing, a young man with a hopeless crush on her, attempts to secure the diamond for himself to earn her love by giving it to her personally, ending up in the backwater Swiss town of Mügli am See by following a false clue. Thus begins a dash for the diamond from London through Paris to Morocco.

The Blonde Hurricane contains examples of: