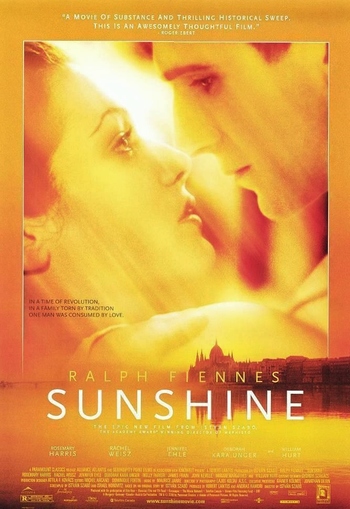 Sunshine is a 1999 historical drama film directed by István Szabó and written by Israel Horovitz and Szabó.

It follows five generations of a Hungarian Jewish family, originally named Sonnenschein (German: "sunshine"), later changed to Sors (Hungarian: "fate"), during changes in Hungary, focusing mostly on the three generations from the late 19th century through the mid-20th century. The family story traverses the creation of the Austro-Hungarian Empire through to the period after the 1956 Revolution, while the characters are forced to surrender much of their identity and endure family conflict. The central male protagonist of all three generations is portrayed by Ralph Fiennes. The film's stars include Rachel Weisz and John Neville, with the real-life daughter and mother team of Jennifer Ehle and Rosemary Harris playing the same character across a six-decade storyline.