Literature / Where Angels Fear to Tread 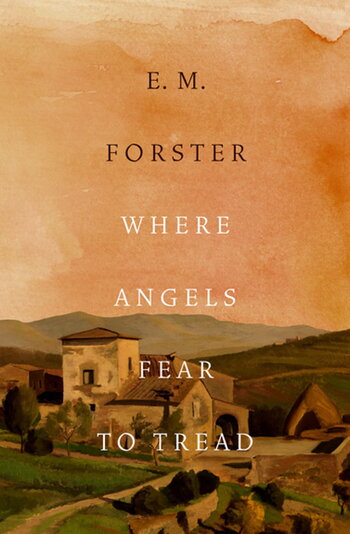 "She looked at him with great friendliness, for he had made her life endurable. At that moment the train entered the St Gotthard tunnel. They hurried back to the carriage to close the windows lest the smuts should get into Harriet's eyes."
—Final words
Advertisement:

Debut novel by E. M. Forster first published in 1905. It is a dark comedy about a clash of cultures between the staid English middle class and the more ebullient Italians.

Lilia Herriton, an impulsive young English widow, travels to Italy with her companion, Caroline Abbott. Her mother-in-law, anxious to preserve the good name of the family, hopes that the trip will civilise her become concerned when she decides to stay in Italy, and send her brother-in-law Philip to fetch her home. Unfortunately by the time he arrives Lilia is already married to Gino, the 21-year-old son of a provincial dentist, and Philip and Caroline return to England.

When news comes through that Lilia has died in childbirth, Mrs Herriton goes to great lengths to keep news of her baby from Irma, Lilia's young daughter who has remained at home. However, Irma finds out from a postcard that Mrs Herriton wasn't able to get to in time, and becomes curious about her new brother. Mrs Herriton dispatches Philip and Caroline and her priggish daughter Harriet to gain control of the baby and bring it home to be raised as English. Chaos and tragedy ensue.

A film version, directed by Charles Sturridge and starring several well-known, mostly British actors (Rupert Graves, Helen Mirren, Helena Bonham Carter, Judy Davis, Giovanni Guidelli), was released in 1991. Apart from adding a slight hopeful note to the ending, it was quite faithful to the book, to the point that some viewers considered this a fault. It received a somewhat mixed reception overall; the Washington Post's review seems to have summed it up fairly well, remarking, "On the whole, it's rather like reading without the effort of holding the book. For many, this will do quite nicely, thank you. Others will find it all too stranglingly Anglophilic, which is perhaps the point."

Where Angels Fear To Tread contains examples of: