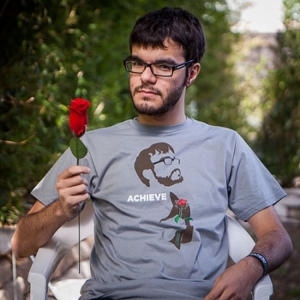 Ray Narvaez Jr. (born September 15, 1989) is an American Let's Player, livestreamer and voice actor who was known for being one of the main cast members of Rooster Teeth's Achievement Hunter. An ace gamer previously known as "BrownMan" (before changing his gamertag and Twitch username to his real name in mid-2020), Narvaez handled most of the achievement guides for the division and covered Easter Eggs from various games. Before his fame, he was a GameStop employee who was very active in the Achievement Hunter community. He was (and remains) good friends with Michael Jones, who helped him get hired by Rooster Teeth to join the AH crew. Narvaez is also a regular on Jones' Internet Box podcast, and along with Jones and Gavin Free, he was a member of AH's Team Lads.

Narvaez left Rooster Teeth on April 17, 2015, after announcing his departure the week before, in order to do full-time video game livestreaming on Twitch. His spot in the AH crew was later taken by Jeremy Dooley. Despite this, he continued to voice his X-Ray character (alongside Free's Vav character) in Rooster Teeth's X-Ray & Vav for season 2.

You can find his Twitch channel here

Shout out to TV Tropes for the trope list: