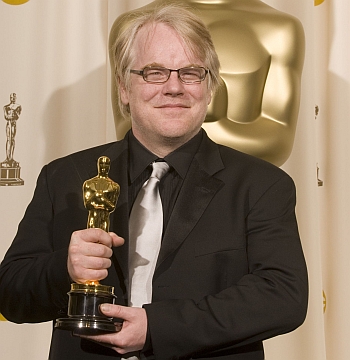 Philip Seymour Hoffman (July 23, 1967 - February 2, 2014) was a versatile American film and theater actor best known for playing the title role in Capote and his collaborations with Paul Thomas Anderson.

He was most notable for frequently playing as eccentrics, lowlifes, losers and misfits, and alternated between supporting roles in major Hollywood movies and leading roles in independent movies throughout his career, while still maintaining a presence in theater with productions such as Death of a Salesman and Long Day's Journey Into Night. He won the Academy Award for Capote and was nominated three other times.

He died from a drug overdose in February 2014 at age 46; his final film role was in The Hunger Games: Mockingjay.

His son, Cooper Hoffman, is also an actor, with his first leading role being in Paul Thomas Anderson's Licorice Pizza.