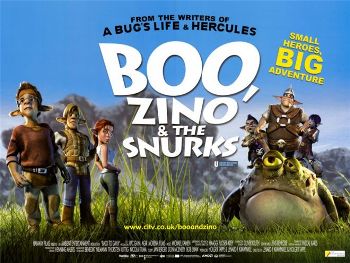 Boo, Zino & the Snurks (shortened to The Snurks in some countries) is a 2004 Hanway Film from the writers of A Bug's Life and Hercules. The main characters of the film, the adventurous (but slightly egotistic) Zino and the intelligent (but cowardly) Boo, live in a fantasy world known as Gaya. One day, Zino enters a race to prove his excellence, with the prize being a kiss from the mayor's daughter, Alanta. Competing in the race with him are the Snurks, a trio of cheaters that will try anything to get the spotlight off of Zino and onto them, and Alanta herself, who's in disguise in order to prove to her father that she can take care of herself. After a race full of hijinx that Zino and Boo win, a mysterious vortex opens up in the sky, sucking up a powerful stone that keeps the world in tact. The Snurks, Zino, Boo, and Alanta all jump into the vortex after the stone, hoping to save the world and possibly get respect for it.

The catch? The portal leads them to the 'Real World'; Boo and Zino's world is just a popular television show, and a Mad Scientist has discovered how to connect fiction to reality to accomplish an evil plot. Only an inch high in this unfamiliar terrain, the Gayans must overcome various obstacles to get back their stone and return home, getting help from the creator of their show (an old man named Albert Drollinger, voiced by Patrick Stewart) along the way.