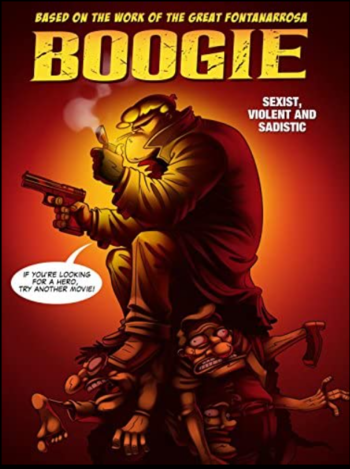 If you're looking for a hero, try ANOTHER movie!
Advertisement:

Boogie, el aceitoso is a 2009 Argentine adult-orientated animated film based on the Roberto Fontanarrosa comic of the same name, directed by Gustavo Cova.

The titular Boogie "The Oily" is a private investigator, hitman and ex-Vietnam veteran in a crime infested city, ruled over by local kingpin Boss Sonny Calabria. After a run-in with Sony's girlfriend Marcia, Boogie ends up being assigned to escort Marcia — who had turned against Calabria — to testify on a trial on the Boss. Boogie reluctantly agrees to the fee of 1 million, but soon enough he finds himself knee-deep against hordes and hordes of killers, including a vicious mercenary named Blackburn.

This was notably the first 3D animated movie made in Argentina and Latin America. And it's NOT for kids.