Literature / The Voyage of Máel Dúin 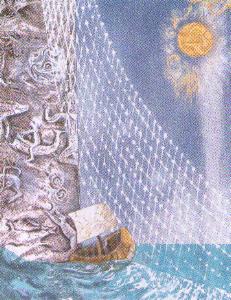 The Voyage of Máel Dúin (Immram Maele Dúin) is a medieval Irish mythological romance from around the late 10th century or older. The original consists of both prose and verse parts. The name of the hero may also be spelled as Maelduin, Maeldune, Maildun, or Mailduin.

The warrior Ailill Ochair Aghra, a noble of the clan Eóganacht of Ninus, partakes in a raid on another clan's territory. On this raid, he rapes a young prioress. Not long after, Ailill is killed by a band of pirates. The prioress gives birth to a boy. As it is not appropriate for a nun to raise a child, the boy is adopted by the local king and queen, who raise him as one of their own sons.

When the boy, Máel Dúin, is a teenager, he learns that the king and the queen are not his real parents. He leaves to meet his father's family, who joyfully receive him. Before long it occurs to Máel Dúin that it is his duty to avenge his father.

With a ship and crew, Máel Dúin goes after the pirates and tracks down their island base. Revenge seems close at hand, when a storm arises, casting the seafarers far off into the unknown Western Ocean. A most extraordinary odyssey awaits Máel Dúin and his companions.

The Voyage of Máel Dúin is an immram or sea-voyage, a religiously toned genre specific to Irish mythology which tells of sailing expeditions into the otherworldly reaches that supposedly lie west of Ireland. Immrama involve adventures with enchanted islands and encounters with bizarre creatures, phenomena that defy the laws of nature, supernatural people, wise hermits, and much much more.

Various translations and adaptions of The Voyage of Máel Dúin exist, although several of them have omitted the detail that Máel Dúin is born of a rape, thereby creating plotholes and obscuring the philosophical themes of the tale.

, a bowdlerized translation with verses

, or retold for children

by Joseph Jacobs. Alfred, Lord Tennyson's "The Voyage of Maeldune"

is a loose adaptation of the romance.

Compare The Voyage of St. Brendan.